Unlock 1.0: The centre has prohibited offerings and receiving of prasad and sprinkling of holy water in the religious places 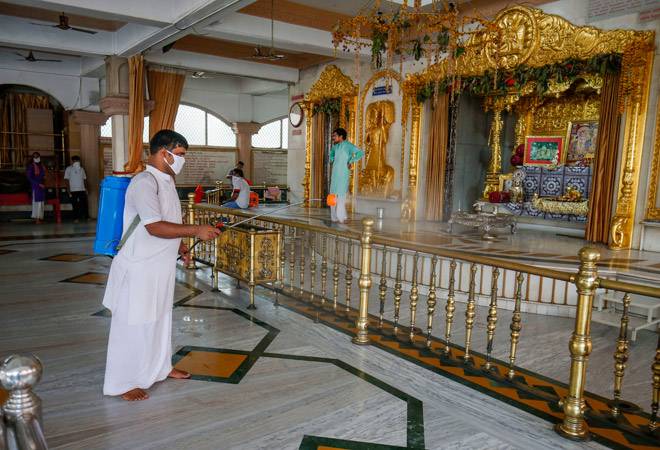 Amid the sharp uptick in coronavirus cases, India has reopened malls, religious places, and restaurants in a calibrated manner on Monday. All these places have reopened after a gap of 75 days.

The government, on May 30, had announced three-phases of "unlock" to gradually reopen the economy after a lockdown was imposed on March 25. In the unlock phase 1, the government had permitted malls, religious places, and restaurants to reinstate their operations. The government had also issued Standard Operating Procedures (SOPs) for the aforementioned places to limit the risk of the spread of coronavirus. For instance,  religious places, malls, restaurants cannot open in the containment zones. Additionally, states have been given full power to decide the SOPs as per their interest.

For example, the Maharashtra government is still contemplating on opening religious places for devotees in the state, whereas, in Goa, churches, and mosques have decided to remain closed for some more time.

Here's a list of do's and don'ts at religious places, malls, restaurants:

The general SOPs include only allowing asymptomatic staff, guests, customers and devotees on the premises, proper crowd management and maintaining effective and frequent sanitation, with a particular focus on lavatories, drinking and hand washing stations/areas. Frequently touched surfaces like door knobs, elevator buttons, hand rails, benches and washroom fixtures among others are be cleaned and regularly disinfected.

Hand hygiene (sanitiser dispenser) and thermal screening provisions should be in place mandatorily at the entrance. The SOPs also recommended installation and use of the Aarogya Setu app.

For air-conditioning and ventilation, the government said the guidelines of the CPWD shall be followed which emphasises that the temperature setting of all air conditioning devices should be in the range of 24-30 degrees Celsius, relative humidity in the range of 40-70 per cent and intake of fresh air be allowed as much as possible besides adequate cross ventilation.

1. Restaurant and food courts in malls to operate at 50 per cent seating capacity with a mandatory distance of six feet between tables.

2. In hotels, the  guests will have to submit their medical history apart from identity card, travel history, etc

3. Establishments need to have separate entry and exit.

4. Luggage should be disinfected before sending the luggage to the rooms.

5. For room service, communication between guests and in-house staff should be through intercom/ mobile phone and room service.

7.  Instead of cloth napkins, the use of disposable paper napkins should be encouraged.

8. The ministry also said that the staff for home deliveries shall be screened thermally by the restaurant authorities prior to allowing home deliveries.

9. In the malls, cinema halls, gaming arcades and children play areas will continue to be in the prohibited segment.

1. The centre has prohibited offerings and receiving of prasad and sprinkling of holy water in the religious places.

2. Touching of idols or holy books has also been banned for now.

3. The government has banned live singing inside the religious places. Only recorded devotional music will be played.

4. Footwears preferably to be taken off inside own vehicle or can be kept in a separate slot for each individual/family outside the worshipping place's premises.

5. Posters on coronavirus-related preventive measures must be displayed inside the premises.

6. Large congregations have been banned until the outbreak gets over.

7. The Centre has urged people to bring their own mats, and that common mats inside the holy places have been disallowed.

8. During the preparation or distribution of food via community kitchens/langars/bhandara, stringent social-distancing rules must be followed.