Coronavirus in India: So far, 590 people have died due to the virus in India, while total tally has topped 18,601. Restrictions in red zones remain the same and it'll take some time before they are lifted from such high-risk areas

Coronavirus cases in India are rising steadily, though experts believe the country has not entered in stage three yet. So far, 590 people have died due to the virus in India, while total tally has topped 18,601. Restrictions in red zones remain the same and it'll take some time before they are lifted from such high-risk areas. The central government's strategy to contain the coronavirus in the second phase of the lockdown includes dividing the districts based on the number of coronavirus cases and major testing exercise. Based on this, the government has divided the states into three zones -- red zone, orange zone and green zones. As per the orders, 170 districts of India's 720 districts have been declared as 'Red Zones' also known as hotspots areas. Two hundred and seven districts have been marked as non-hotspot zones.

'Red Zones' comprise of places with major outbreaks of the coronavirus while orange include places where new cases are emerging or showing a sign of decline. Extremely strict containment measures are bieng taken in 'red zones' while the administration will try to reduce the number of new cases in 'orange zones'.

While red zones comprise places with major outbreaks, orange zones will include places where new cases are emerging or showing a sign of decline. As per the Home Ministry, the identification of hotspots will be done on a weekly basis (every Monday) or earlier.

Strict containment measures will be implemented in hotspots, while non-hotspots districts will try to curb new cases. Besides, districts with no cases will keep a close watch on the situation, besides keeping dedicated COVID hospitals ready. 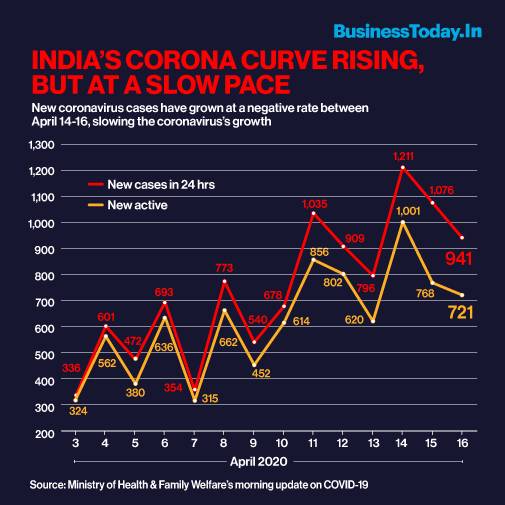 How will a red zone become a green zone?

Hotspots or areas with a large number of COVID-19 cases or clusters with a significant spread of the virus will be demarcated by the states. The authorities will implement strict measures in the red zones. All activities, barring essential services such as medical emergencies and law enforcement, will be stopped in such areas.

How do authorities identify containment zones?

The rapid response teams in different districts identify containment zones based on the number of new and existing cases and contracts traced by them. The authorities will mark an additional 5-7km buffer zone around hotspots to avoid it from spreading to neighbouring districts.

What is the hotspot inclusion criteria? 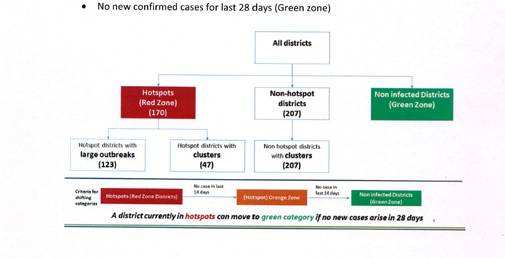 Punjab to declare more goods as essential items from today

Punjab has decided to relax the lockdown measures and declare more goods and services as essentials from April 20. These services include stone crushing and sand and gravel mining under-construction activities. Shops dealing in distribution of books to school and college students have also been allowed to operate in view of the new academic session, an official Punjab government release says.

The Punjab government has also brought the sale of air conditioners, air coolers, fans and repair shops under the ambit of essential goods or services. In accordance with the central government's guidelines, industrial activity is allowed in the state's rural parts, provided the owners of these industries, employing ten or more people, should make arrangements for the stay or transport of workers.

The Union government has said migrant labourers stranded across various states can go to work within states from today, though they will still not be allowed to go back to native places until the lockdown measures are in place. Notably, the government had issued guidelines on the relaxation of the lockdown norms from April 20, keeping in mind the problems being faced by poor, migrants, labourers and those living in rural areas. As per the government, these workers should be registered with local authorities who will also carry out their "skill-mapping" to make it easy for such people to find suitable work.