The year 2021 has been very eventful for the Indian automotive market. Even with the entire industry grappling with supply chain issues that have adversely hit the production and delivery of cars across the country, Maruti Suzuki has managed to continue its dominance in the Indian market.

For December 2021, Maruti Suzuki has as many as eight models featured in the list of top 10 cars sold in India. Interestingly, Tata Motors has emerged as the second-highest selling carmaker in India this month, thanks to the Nexon. Tata has managed to topple Hyundai Motor from number two spot after posting its highest monthly numbers in a decade.

Here is a look at the top 10 cars sold in December in India:

Maruti Swift: Maruti's hatchback Swift continues to hold the second position in the list, despite, the sales taking a dip compared to December 2020. Maruti, in December 2021, sold 15,661 units of Swift, down from 18,131 units during the same period in 2020. The December sales figure were a slight improvement over November when Maruti sold 14,568 units of Swift.

Maruti Baleno: Maruti’s premium hatchback Baleno, which is soon going to receive a facelift update, saw 14,458 units sold compared to just 9,931 units in the previous month. However, the year-on-year (YOY) sales figure for Baleno has taken a hit. In December 2020, Maruti had sold 18,030 units of the premium hatchback.

Tata Nexon: Tata Motor’s sub-compact SUV Nexon is one of the biggest talking point in the industry and has also helped the company rise as India's second-largest carmaker ahead of Hyundai Motor. Tata sold 12,899 units in December 2021, Nexon’s highest ever sales standings. Tata has sold 9,831 units of Nexon in November 2021, and just 6,835 units back in December 2020.

Maruti Alto: Maruti's oldest surviving model Alto, whose rankings dropped down a few positions in December 2021 secured the sixth position in the list of top cars sold in India. In December 2021, only 11,170 units of Alto were sold. The sale of Alto has gone down significantly compared to 18,140 units Maruti sold in December 2020 and is even less in November last year, when Maruti saw 13,812 units sold.

Maruti Swift Dzire: The only sub-compact sedan feature on the list is Maruti Suzuki Swift Dzire, even though the sales figure has decreased. Maruti sold 10,633 units of Dzire in December 2021, down from 13,868 units during the same month in the previous year.

Hyundai Venue: Hyundai's only car to feature in the list consolation is its sub-compact SUV Venue, which has jumped a few spots to number 8 on the list. Hyundai had managed to sell 10,360 units of Venue last month, down from 12,313 units in December 2020.

Maruti Vitara Brezza: Maruti Suzuki's sub-compact SUV Brezza, which is also expected to get a facelift update later this year, continues to be a strong favourite among Indian buyers with 9,531 units sold last month. Maruti, in December 2020, had sold 12,251 units of the SUV while in the previous month, it had sold 10,760 units of Brezza. 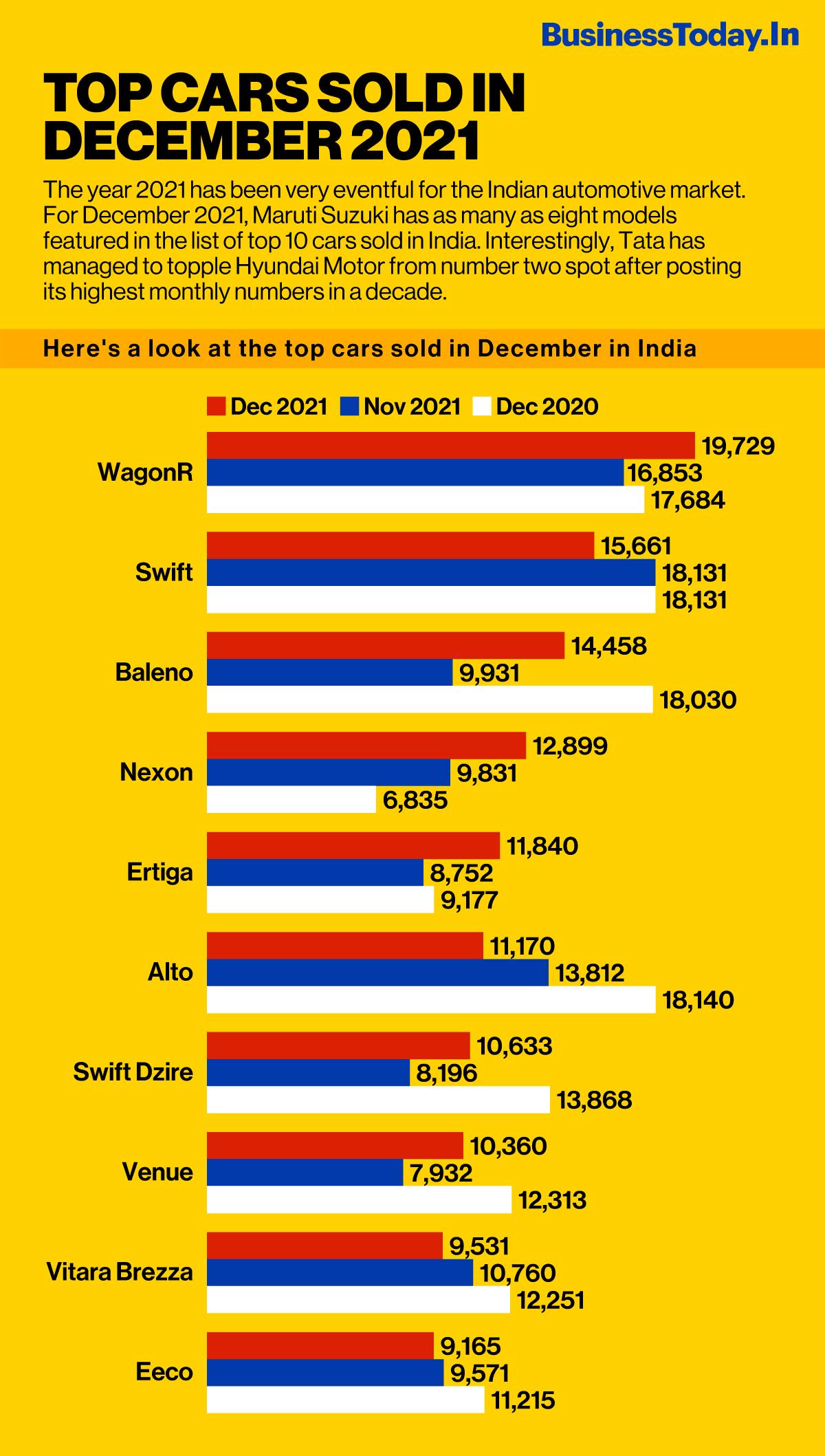 Hyundai Motor India, the second-biggest carmaker in terms of sales in India, saw its monthly and yearly sales dip by almost 13 per cent and 32 per cent, respectively. The carmaker reported a wholesale of 32,312 units.

Mahindra also managed to improve its performance with a wholesale of 15,338 units. However, the ongoing semiconductor shortage is a major concern for the carmaker.

Toyota Kirloskar Motor reported a 45 per cent YoY increase in wholesale numbers at 10,382 units in December, but a decline of 17 per cent compared to the previous month's figures.

For Kia Motors India, the wholesale numbers declined 34 per cent YoY and 45 per cent compared to the previous month at 7,797 units.