The estimates for FY21 further show that, three out of two components of industry, 'mining and quarrying' and 'manufacturing' will have minus 12.4% and minus 9.4% growth
Prasanna Mohanty

Less than a fortnight to go before the FY21 budget presentation, the state of Indian economy does not look good, notwithstanding the hypes around "faster than expected", V or K-shaped recovery or "a never before budget". For any such change to happen, India needs a drastic course correction that may be easier said than done in a top-down polity.

Here is first what the First Advance Estimates of National Income, released on January 7, 2021, indicate about the growth prospects beyond FY21.

Both demand and investment are down and out What the graph shows is that private consumption (PFCE) and investment (GFCF), the two constituting 87-89% of the total expenditure GDP in FY19 and FY20, will touch a new low in FY21 with their growth rates plunging to minus 9.5% and minus 14.5%.

These trends show that a dramatic reversal is unlikely in the short run, and since they contribute 87-89% to the GDP, a quick reversal in GDP growth is not likely either.

The two GDP components to register positive growth in FY21 are government expenditure (GFCE) and net exports. The latter is not something to cheer about.

As for government expenditure (both Centre and states), the optimistic projection in growth seems to run counter to Q1 and Q2 data of FY21, which have already been released. The Q2 data (released in November 2020), had shown a 25% fall compared to Q1 of FY21, which was shocking since by the time Q2 started (July, August and September) the unlocking was already a month old.

The central government's total spending in the first six months (Q1 and Q2) of FY21 was less than that of FY20 - Rs 14.8 lakh crore of FY21 against Rs 14.9 lakh crore of FY20 - according to the data released by the Controller General of Accounts (CGA). Capital expenditure was consistently lower in the three months of Q2 of FY21 against Q2 of FY20. (For more read "Rebooting Economy 47: Do India's fiscal numbers suggest a quick turn-around? ")

How would the growth in GFCE turn a highplus 5.8% in FY21 is a mystery.

What a positive growth in government expenditure (GFCE), however, means is that only one engine is working, as should have been anticipated because a recessionary trend had already set in before the pandemic hit. That is what prompted eminent economists like Abhijit Mukherjee and Raghutam Rajan to repeatedly ask the government to increase fiscal spending, which was ignored.

The AatmaNirbhar Bharat packages did the reverse. It had very little fiscal spending or government expenditure (1-2% by most estimates), the rest being credit and credit guarantee schemes. Going by the growth estimates for investment (GFCF) in FY21 (minus 14.5%) the AatmaNirbhar Bharat failed to kick-in credit intake, as had been forewarned. It was a typical supply side solution to a demand side problem.

The RBI's monthly bank credit to non-food sector shows how much it has steadily gone down in the past two years. The government would have known this very well since this high-frequency data is available on fortnightly basis too. Investment is directly linked to demand. The finance ministry had warned about demand slowed down way back on May 1, 2019 with its Monthly Economic Report for March 2019.

The untimely and unplanned lockdown rendered millions jobless and shut millions of businesses, particularly small businesses, drastically reducing income and consequently, demand in the economy. Despite the slump, as shown in the graph, in private consumption, it would still be accounting for 56% of the GDP in FY21.

Unless jobs are restored and small businesses restart, demand/consumption is unlikely to revive or drive growth. The key bottleneck in this is that the government has no idea how many lost jobs and businesses shut. It did not, and has not, collected the requisite information and hence, the budget will be designed in a complete information vacuum.

Since the credit and credit guarantee schemes have failed to generate demand, the obvious way to go forward is direct cash support to the poor who lost jobs and their small businesses due to the cumulative impact of the lockdown, demonetisation and GST.

Imports tumble, fall below exports for third time since 1970-71

The only component of the expenditure GDP left out so far is net export (export minus import), and for good reason.

India's trade balance (export minus import) has been negative, plunging to lower depths with each passing year since 1970s for which the RBI provides data. There were two exceptions to this, one in 1972-73 and 1976-77. The following graph maps the trend.

The estimates for FY21 show a third positive balance. The question that needs to be asked is why this would happen. 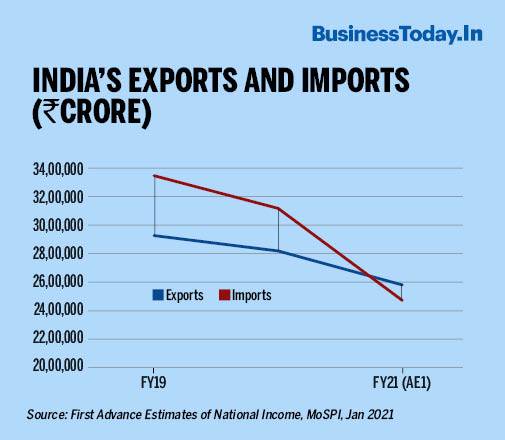 Imports will plunge below exports in FY21.

Why this is not a good news

Firstly, a fall in imports re-emphasises weakening of domestic demand.

Secondly, imports constitute 32.5% of India's exported goods and services (called 'import intensity of exports') for the whole economy, and 51% for manufacturing goods. A fall in imports is, therefore, counter-productive and would eliminate the possibility of export-led growth that China and other developed countries have seen. (For more read "Rebooting Economy 47: Do India's fiscal numbers suggest a quick turn-around?")

The import-substitution policy embodied in AatmaNirbhar Bharat will take India further down this path, which is why all economists, including the government' loudest cheerleader Arvind Panagariya, have opposed this failed policy of 1960s and 1970s.

The short answer is to ensure assured businesses for domestic companies and protect them from outside competition, as was the case in 1960s and 1970s. That policy ended in a failure and there is no reason why the same wouldn't happen again. Former Chief Economic Advisor Arvind Subramanian has argued that India needs exports for growth since the domestic market is not big enough to provide a big enough lift. (For more read "Rebooting Economy 45: What is AatmaNirbhar Bharat and where will it take India? ")

The following graph maps the growth in three sectors of the Indian economy.

Notice, the only positive growth in FY21 is seen in agriculture (plus 3.4%). Industry and services are expected to plunge to minus 8.5% and minus 9.2%, respectively. 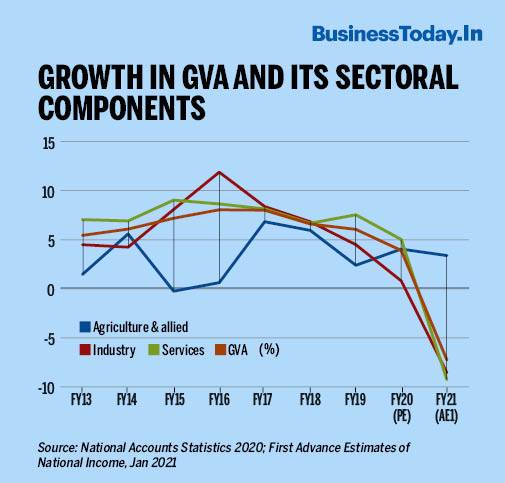 Notice also how the growth in agriculture has fluctuated the most (dropped to zero or near zero in FY13, FY15 and FY16) because it is weather-dependent.

The estimates for FY21 further show that, three out of two components of industry, 'mining and quarrying' and 'manufacturing' will have minus 12.4% and minus 9.4% growth. That manufacturing is in trouble is evident from high-frequency data on industrial production (IIP), particularly those relating to the core sector. Lack of demand has lowered industrial production and capacity utilisation for years now. In fact, manufacturing growth was 0.03% in FY20 (PE) when the GDP growth was 4.2%. (For more read "Reality check: Corporate tax cut unlikely to increase investment or employment ")

In services, all four components are expected to register negative growth - ranging from minus 0.8% to minus 21.4%. The AatmaNirbhar Bharat packages ignored the services in providing fiscal support. If it gets no support, it is unlikely to jump back to 5% growth that it had recorded in FY20. (For more read "Rebooting Economy 58: The untold story of India's services sector ")

How will India regain its growth momentum?

The answer is obvious and known for long: Direct cash support to the poor to revive consumption demand and higher fiscal spending to kick-start the investment cycle.

Enough has been written and said by leading economists of the world to debunk the neoliberal idea of 'fiscal austerity', which is more about politics and less about economics, for India to be trapped forever in the face of grave economic crisis. (For more read "Coronavirus Lockdown XVII: The economics behind India's Rs 21 lakh crore package " & "Deconstructing Neoliberalism II: How neoliberal ideas can wreak havoc on economies ")

The other obvious answer is to reverse the import substitution policy that embodies the AatmaNirbhar Bharat. Only then will the next budget truly be "a never before" one.