News
OPINION
Columns
Rebooting Economy 57: When and how will industry take India to next level of growth?

Rebooting Economy 57: When and how will industry take India to next level of growth?

The only new initiative to boost industrial production is the AatmaNirbhar Bharat Abhiyan launched on May 12, 2020

India has struggled long and hard to industrialise and turn into a developed, high-income and prosperous economy like the US, many European countries, Japan, South Korea and others but has consistently failed.

More than seven decades later, their contributions have improved, but not significantly, and are confined to a very narrow band, nowhere close to those of industrialised nations.

Poor contribution to GDP and employment

The following graph maps the share of industry and its main component, manufacturing, in the GDP (national income) since 1950-51. The rest 75% or more of the national income (GDP) comes from agriculture and services - the most neglected sectors of the Indian economy. The services sector virtually grew on its own to contribute more than 60% to the GDP. (For more read "Rebooting Economy 56: Why India should follow agricultural development-led industrialisation growth model ")

When it comes to employment, it is even worse.

The industry's contribution never touched 14%, peaking at 13.1% in FY05, and manufacturing peaking at 12.2% in the same fiscal.

The rest 86% or more comes from agriculture and services - which never received the attention and care that industry has. 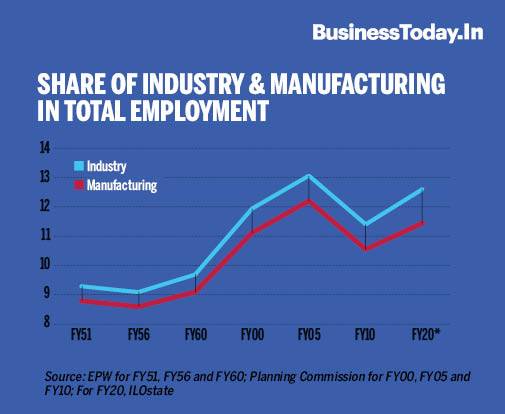 The first two graphs demonstrate how India's economic policies have spectacularly failed to make India a developed and prosperous economy, even in the post-1980 reform era.

Make no mistake, industry has been pampered for decades through policy supports; virtually free land, mines and minerals (until the Supreme Court intervened in 2013 and asked for auctioning of natural resources after the 2G scam); tax cuts, tax holidays and fiscal stimulus; liberal bank credits/liquidity infusion and routine write-off of loan defaults (NPAs) etc.

There is a good case for promoting manufacturing though, because that is how industrialised countries grew rich and prosperous.

The last plan (12th Five-Year Plan) of the erstwhile Planning Commission, which was released in 2013, made its case for boosting manufacturing through the following two graphs.

The first shows the growth of India's manufacturing was lower than that of its GDP during 1999-2009, while the reverse was true forpost-war success storieswhich witnessed rapid industrialisation. The second shows the share of India's manufacturing stuck at about 15% of its GDP, which is considerably lower than the others (double or more than that in China, South Korea and Thailand). 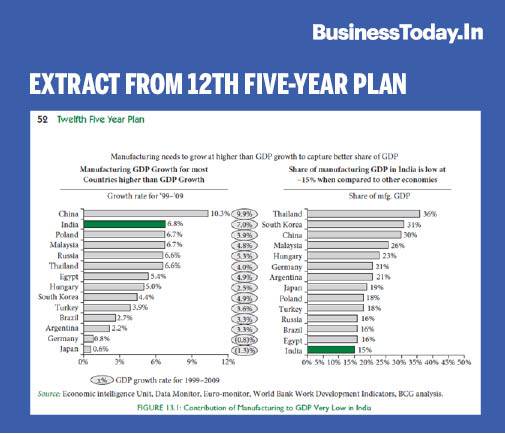 The 12thPlan acknowledged the manufacturing's failure, particularly in providing employment, which, it said, saw a decline in absolute terms from 55.8 million to 50.7 million (loss of 5 million jobs) between 2004-2005 and 2009-10, although, the total employment during this period had grown from 457.5 million to 460 million (gain of 2.76 million).

This was the genesis of the infamous "job-less growth" narrative during the UPA-II because those were the years when India's growth was at its peak.

When the Planning Commission released a fresh datasheet on sector-wise employment a year later in 2014, it turned out that the job loss in manufacturing was 7.2 million during 2004-05 and 2009-10 (from 55.77 million to 48.54 million) - more than 5 million that the 12th Plan had said. The total employment remained unchanged (from 457.5 million to 460 million) in this datasheet.

Why jobs matter if economy is growing?

Jobs are the primary means of redistribution of wealth. If an economy is growing and generating wealth but not creating enough jobs, it means the benefits of growth are not reaching the rest of population and the wealth is concentrating in the hands of a few.

To address job-loss in manufacturing, the 12th Plan said "emphasis should be given to creation of appropriate skill sets among the rural migrant and urban poor" and raise manufacturing sector growth to 12-14% over the medium term "to make it the engine of growth".

As for the industry as a whole, the 12th Plan said "architecture of the industrial policy" needs to change to boost its growth. Instead of a hands-off approach of the reform era India should learn and adopt the approach of post-war success stories (Japan, South Korea, China) in growing competitiveness and scale of their manufacturing: Close coordination between producers and government policymakers, with governments playing active role in providing incentives for domestic industrial growth and in relieving constraints on industrial competitiveness.

This marked a significant change in India's approach to industry/manufacturing in the 'era of planning' that continues today.

In the first few decades of India's independence, state (government) actively participated in production, exercised tight control over resources and private enterprises and then adopted import substitution policy to protect local manufacturers. In the post-reform era starting with 1980s, private enterprises were given a free hand to manufacture and trade with policy and financial incentives.

More of the same in post-planning era

After the UPA-II government was replaced with the NDA-II, the Planning Commission was dismantled, ending the era of planning - centralised or otherwise. But the old policies and practices continued.

The first Economic Survey of 2014-15 of the new government acknowledged the problem of 'job-less growth' but couched it differently on the plea that long-term employment trends are difficult to interpret because of bewildering multiplicity of data sources, methodology and coverage.

It said: "One tentative conclusionis that there has probably been a decline in long run employment growth in the 2000s relative to the 1990s and probably also a decline in the employment elasticity of growth: that is, a given amount of growth leads to fewer jobs created than in the past."

It did, like the Planning Commission, build up a case for skilling the Indian workforce, which is largely unskilled. The new government adopted the UPA-II era National Manufacturing Policy (NMP) of 2011, which set the goal of raising manufacturing's share to 25% of the GDP, although it was re-christened and re-launched as "Make in India" in 2014 with the same stated goal.

Manufacturing had lost 3.2 million jobs - 37% of the total job loss of 9 million. The magnitude of the job loss would have been far greater had the services not added 17.1 million jobs.

A year earlier, in 2018, the Azim Premji University had published another study that showed a clear disconnect between growth and job creation. That study said in 1970s and 1980s, when the GDP growth was 3-4%, the employment growth was 2% but since 1990s and particularly in 2000s the GDP growth had accelerated to 7% but the employment growth had slowed down to 1% or less.

Why this happened or would continue to happen is known: Technological advances (automation, artificial intelligence, machine learning etc.) are rapidly displacing humans with machines for work.

This is a basic question not many dare to ask or answer.

In a segment titled "Expansion or Pre-mature non-Industrialisation?" Subramanian wrote that it was a stylised fact that the process of development included stages of industrialisation followed by de-industrialisation after which the services sector becomes more important.

To prove his point, he presented the following two graphs - one on South Korea, "a poster-child for manufacturing-led growth", and the other on India.

The graph on South Korea showed a "typical shape", he wrote, that is, the share of manufacturing started very low at 5% and rose to almost 30% before starting to decline but not before a fairly high level of GDP was reached.

In contrast, the pronounced U-shape of South Korean graph was missing for India, that is, the share of India's manufacturing in output and employment "had hardly changed in 30 years". The state of manufacturing in states was equally sobering even among the leaders. Some of the key findings of the 2014-15 Economic Survey were:

The reasons for such a situation are: (i) distortions in labour, capital and land markets and (ii) shift of manufacturing to a fairly skill-intensive activity while India has abundant supply of low-skilled labour.

None of these reasons is unknown or unaddressed, but no significant impact has been noticed (the first two graphs have demonstrated).

Subramanian sought to address the second part (ii) and advocated that instead of trying to revive unskilled manufacturing (which "would be history-defying achievement because there are not many examples of significant reversals of de-industrialisation") India should skill its workforce (like the 12th Plan) which "will at least ensure that future generations can take advantage of lost opportunities".

The "Skill India" programme was launched with big fanfare in 2015 by re-christening the existing skilling programme that was kick-started during UPA-I with the establishment of National Skill Development Corporation (NSDC) in 2008.

It made big promises, set high targets but soon lost steam and is now forgotten. A visit to its website shows the programme has been reduced to a dashboard of myriad numbers with no credible achievement to show.

AatmaNirbhar Bharat is no solution

The only new initiative to boost industrial production is the AatmaNirbhar Bharat Abhiyan launched on May 12, 2020 (FY21) at 8 pm live telecast.

This programme takes India back to 1960s and 1970s when import substitution was pursued to protect local industries from global competition and ended up as a big failure: Indians were saddled with inferior goods; there was perennial shortage of supply (waiting for phones or scooters); India's goods were not competitive globally and hence export did not grow.

Now there is an additional problem.

Post-liberalisation, export has improved and Indian manufacturing is better in quality and more competitive. However, it is heavily dependent on imported inputs. Called "import intensity of export", India's export of manufacturing goods now comprises of 51% of inputs imported from abroad. Thus, import restrictions that the AatmaNirbhar entails will harm export and limit India's growth prospects. (For more read "Rebooting Economy 50: Economic reforms for whom and for what? ")

There is no fresh policy thinking or solution on the table to boost manufacturing or industry yet. Nobody seems to be looking for it either.

Until a new policy decision is made, here is an idea to ponder over: How about giving proportionate attention to agriculture that provides the maximum employment (more than 40% of the total workforce) and services that provides the maximum income (more than 60% of GDP), instead of disproportionate attention to industry/manufacturing that has done neither in the past 70 years?