Private wealth creators are solely responsible for India's banking stress; increasingly fleeing India with their wealth and bank loans, and those making huge profits are doing so by cutting jobs and wages

There is no evidence that private sector wealth creators are more efficient in running business, creating wealth or distributing wealth

Political theories masquerading as sound economics (free-market rhetoric better known as Thatcherism and Reaganism) are back with a bang. Statements like "government has no business to be in business" or that "wealth creators (in private sector) are important for India, only then can wealth be distributed, and jobs be generated" are hitting the headlines again.

The context now involves handing over public ownership of two banks and a general insurance company to the private sector, the recent budget announced. The government has already identified four mid-sized state-run banks for this - Bank of Maharashtra, Bank of India, Indian Overseas Bank and Central Bank of India.

For those who believe the private sector is more efficient at running businesses, investing in wealth creation that are then distributed among ordinary citizens or benefiting them by way of job creation, here is a reality check.

Wealth creation for private growth and by cutting jobs

The RBI's Fiscal Stability Report (FSR) of January 11, 2021 carried a "systemic risk survey" conducted during October-November 2020 to capture the perceptions of experts, including market participants, on the major risks faced by the Indian financial system.

The number one risk it listed was: "Lack of robust private sector investment".

That begs a question: Why do experts the RBI consulted are worried about private wealth creators not investing enough for growth, especially when there is no paucity of easy credit (low-interest liquidity infusion by the RBI) or tax sops, including a massive corporate tax cut of Rs 1.45 lakh crore gifted in September 2019 amidst tight fiscal situation?

What the corporate tax cut did instead of investing in growth and creating jobs that was promised was explained by the RBI in its annual report of 2019-20: "The corporate tax cut of September 2019 has been utilised in debt servicing, build-up of cash balances and other current assets rather than restarting the capex cycle".

The next two risks the RBI's FSR listed provide some clues: "Declining consumer confidence/spending" and "Supply chain disruptions". When demand is weak, production of goods and services remains subdued, hence the need for fresh investment is also subdued. Supply chain disruptions, caused by the prolonged and unplanned locking and unlocking of the economy, remain a worry because of continued threat perception from the pandemic.

The apex bank didn't explain what workforce reduction/employee stress is or why even when it was public knowledge that the corporate sector had registered a high profit in Q2 of FY21 amidst the pandemic ruins of the economy and people.

A few days earlier, on December 29, 2020, leading business information company Centre for Monitoring Indian Economy (CMIE) had released its analysis of the financial statements of 4,234 listed companies which had filed for Q2 of FY21. Titled "Why companies cut wages when profits soared", it highlighted two key findings:

Apparently stumped by these developments, this report explained what slashed wages meant: "A cut in the wage bill could mean a combination of layoffs and wage rate cuts. It is likely that the wage bill was contained largely through a cut in the wage rate for the permanent staff... The axe on headcount is more likely to be through a slashing of contractual labour. Payments made to contractual labour do not show up as wages on the company's financial statements since these payments are made to contractors... Hiring of labour through contractors has been on the rise in recent years..."

Even before the pandemic hit, investment by the private corporate sector (private wealth creators) was not exactly booming. 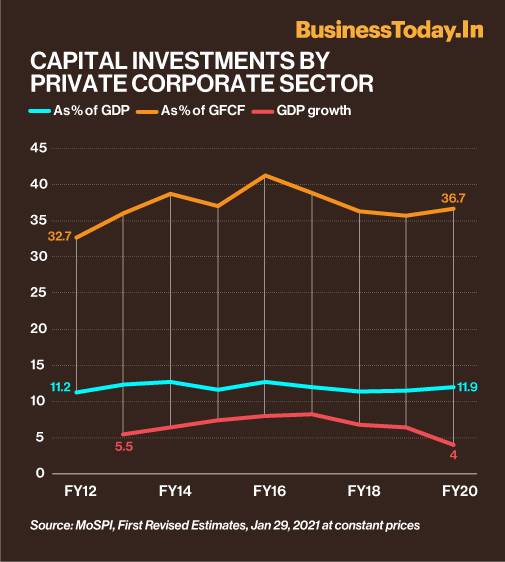 FDI inflows and outflows through tax havens and shell companies

The most significant element of both FDI inflows and outflows is that these are almost entirely routed through tax havens which have zero or near-zero tax rates in which shell companies play a critical role.

While how many shell companies are working is not known, the Department of Industrial Promotion and Internal Trade (DIPP) statistics show that an average of 80% FDI inflows came through well-known tax havens in the past two decades - from April 2000 to June 2020 - for which it provides data. The RBI's data for FDI outflows for FY18 and FY19 shows more than 82% of FDI went away through tax havens.

The following graph maps the shares of tax havens of Singapore, Mauritius, Netherlands, US, UK, Cayman Islands and Cyprus which are common to both inflows and outflows for FY18 and FY19 for the purpose of illustration. Global studies show that at least 37.5% of FDIs flowing through tax havens are "phantom" FDIs or FDIs meant for tax evasion, rather than real investment. These FDIs pass through empty corporate shells that have no real business activities and primarily exist for tax evasion. (For more read: Taxing the untaxed VI: What are tax havens and why they matter to India ).

Round-tripping (funds coming back to the country of origin after a series of fake transactions) is a well-known phenomenon in the Indian economy about which the RBI has done nothing to check despite a growing body of evidence. (For more read: Reality Check: RBI's casual approach to round-tripping menace )

How much of these FDIs are 'phantom' or involve round-tripping in the case of India is not known. What is known is that the FDI inflows have not brought technology transfers, marketing expertise, promotion of exports and creation of jobs etc. Quantity, rather than quality, has been India's focus despite all these pointed out in studies. (For more read: Decoding Slowdown: FDI inflows trend shows all's not well; growth drops to single digits)

Wealth creators fleeing with both own and public wealth

What is very well known is that private sector wealth creators of India have saddled PSBs with huge piles of NPAs because they don't repay their loans and the government has been generous in writing those off as a matter of standard banking practice.

The RBI data shows the share of private sector in total NPAs of PSBs is 98.6% in the past 18 years between FY03 and FY20 for which data is available. (For more read: Rebooting Economy 67: Set the record straight before setting up a Bad Bank )

It is also well-known that dozens of private wealth creators like Vijay Mallya, Nirav Modi, Mehul Choksi, Jatin Mehta and Sandesara have fled India in recent years without paying back their loans to PSBs and taken up citizenship abroad.

Here is a third shocker.

More and more private wealth creators are fleeing India with their wealth through 'residence-by-investment', or 'citizenship-by-investment' programmes offered by other countries. These are dollar billionaires and millionaires (High Net-worth Individuals or HNIs) that are tracked by the Mauritius-based AfrAsia Bank.

According to the bank's Global Wealth Migration Review of 2020, 7,000 Indian HNIs (2% of India's total HNIs) migrated out in 2019 alone - India's was the second largest contingent after China. Such migrations entail investment of $300,000 to $3 million in those economies and globally, about 30% of HNIs migrating out exclusively opt for this route.

More wealthy Indians are likely to have fled in 2020, as a London-based global citizenship and residence advisory firm is quoted as telling a leading national daily. The firm said the number of enquiries for 'residence-by-investment' or 'citizenship-by-investment' programmes went up by 62.6% in 2020, compared to 2019.

What is government business? Weakening PSUs and creating monopolies?

While it is said that the government has no business to be in business, the Indian govenment built PSUs with public money to industrialise and make itself self-sufficient (AatmaNirbhar) after gaining independence from the colonial rule in 1947. Now all these are being systematically damaged.

The government has already sold public stakes in five PSUs - HPCL, REC, HSCC, NPCC and DCIL) - which were paid for by another set of PSUs - ONGC, PFC, NBCC, WAPCOs and public sector consortium of ports. The money went to the government, but the PSUs were sucked dry of their cash reserves. (For more read: Budget 2020: Strategic disinvestment, a questionable source of off-budget financing )

Similar is the case with other PSUs which were forced into buying public stakes in other PSUs, the proceeds of which went to the government kitty for running its affair.

PSUs have also been sucked dry of their financial resources through large transfers of dividends and surpluses that the government demands from time to time.

A 2019 CAG report (number 2) said the central public sector enterprises (CPSEs) paid Rs 76,062 crore in FY18 to the central government by way of dividend and surplus. This included RBI's contributions of Rs 40,659 crore. In August 2019, the RBI further transferred Rs 1.76 lakh crore as surplus/dividend. (For more read: Coronavirus Lockdown XV: Not just stimulus 2.0, getting fiscal mathematics right is critical too )

After weakening PSUs, the government plans to handover ownership to private wealth creators. The change in ownership of public assets is not limited to two public sector banks and a general insurance company. Niti Aayog has already drawn up a list of 48 PSUs, including Air India and some assets of NTPC and Steel Authority of India, which have played a major role India's development and growth.

Wealth accumulating at the top at the cost of the poor

Ironically, while the pandemic deprived millions of their livelihoods, pushed them into extreme poverty and deprived them of healthcare and education India's private sector wealth creators created more wealth and stock markets boomed.

The Oxfam International's January 22, 2021 report, which tracked the impact of COVID-19, said that India's 100 billionaires saw their fortunes increase by Rs 12,97,822 crore since March 2020 while millions lost their livelihoods.

This was also the time when the economy was sinking and India turned into one of the slowest growing economies, from the fastest one in 2015. The World Bank, IMF and Brookings Institute have estimated that India would see 40-85 million Indians slip into 'extreme poverty' (per capita per day living expense of $1.9) due to the pandemic. The Oxfam International's January 22, 2021 report said inequalities in health and education had risen sharply. (For more read: Rebooting Economy 63: Budgeting FY22 with critical information gaps )

It has become fashionable to blame the "Nehruvian socialism" for all that ails India's economy, without knowing that the PSUs built then with public money industrialised India; income of the bottom 50% grew the fastest then than any other time and income equality was at its lowest. It was the real era of wealth distribution.

The following graph is taken from French economists Thomas Piketty and Lucas Chancel, who studied India's income inequality from 1922 to 2015, to demonstrate how the Nehruvian socialism created and distributed wealth. The Oxfam International's January 2020 report "Time to Care" highlighted how high inequality has risen in India.

Yet, politicians and economists don't hesitate to tell people the virtues of private wealth creators at the drop of a proverbial hat. If any wealth has been redistributed in recent years, it is certainly not to the millions of Indians who live in utter poverty or those who have lost their livelihoods and slipped into extreme poverty in the past few months.