It will be difficult to cut into the seat share of regional parties further even though it's a battle of BJP vs Congress.

The two big political parties, BJP and Congress together won an average of 56.5 per cent seats in the last four Lok Sabha Elections (306.75 out of 543 seats), indicating that the regional parties may become a reckoning force in the 2019 National Election if BJP's seat share falls compared to 2014 numbers. BJP and Congress won a maximum of 60 per cent seats in 2014 (considering the last four elections) and a minimum of 52 per cent in 2004. It indicates that a minimum share of 40 per cent seats remained with regional parties despite the anti-incumbencies, regional issues and political waves. Between 1999 and 2014, both BJP and Congress formed governments twice each with the support of regional alliance partners.

BJP won an aggregate 718 seats in the last four elections, while Congress won 509 seats and it means BJP has won 209 seats more than Congress--thanks to the swing in 2014, in which the Modi wave combined with 10 year anti-incumbency of the Manmohan Singh government and a slew of corruption charges brought BJP to power. BJP's average number of seats in the four elections is 179.5, while Congress has 127.25. 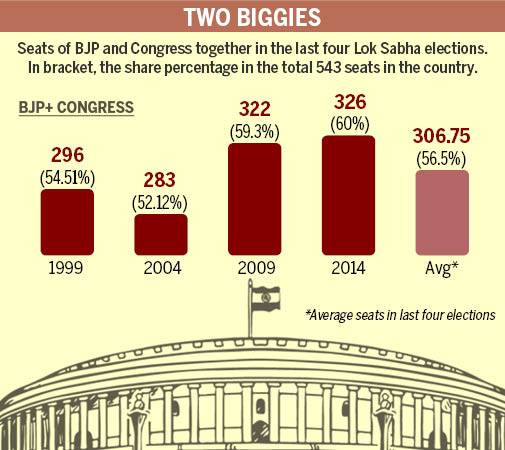 Seats of BJP and Congress together in the last four Lok Sabha elections.

It was Jayalalithaa's All India Anna Dravida Munnetra Kazhagam (AIADMK) was the third biggest party in the country with 37 seats in 2014. Mamata Banerjee's Trinamool Congress was close behind at fourth spot with 34 seats. Biju Janata Dal (BJD) of Naveen Patnaik was at the fifth spot with 20, followed by the allied parties of BJP--Shiv Sena (18 seats) and Telugu Desam Party or TDP (16). In 2009 election, Mulayam Singh Yadav's Samajwadi Party (SP) came third with 23 seats, followed by Bahujan Samaj Party or BSP (21), Janata Dal United or JDU (20), TMC (19), DMK (18) and Communist Party of India (Marxist) or CPM (16). In the election before that in 2004, CPM bagged 43 seats and came third, followed by SP (36) and Lalu Prasad Yadav's Rashtriya Janata Dal or RJD (24). CPM had won 33 seats in 1999, followed by TDP (29) and SP (26). 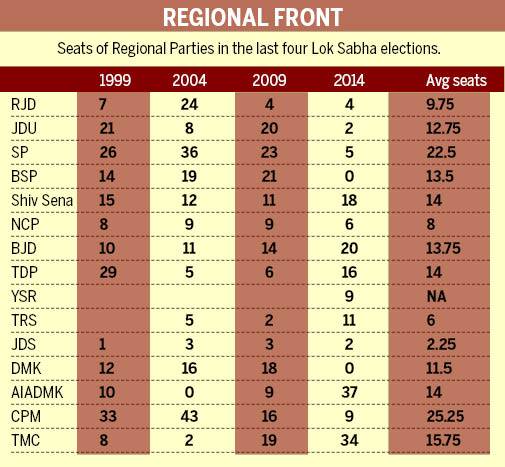 In the seat average of four elections, CPM comes first with 25.25 seats, but their vote share has diminished drastically--38.57 per cent in 2004 against 23 per cent in 2014--after Mamata Banerjee defeated them in West Bengal state election. Between 2004 and 2014, the vote share of BJP had risen from 8 per cent to 18 per cent in Bengal. TMC is expected to continue as the strongest party in Bengal, where there are 42 Lok Sabha seats, and benefit in a four corner fight, according to opinion polls.

The regional political forces in Uttar Pradesh, SP and BSP have shown consistency in national election performances, except during last time. Both the parties achieved it contesting separately. But they are together this time. In the three elections between 1999 and 2009, SP had got an average of 28 seats, while BSP got 18. However, in the 2014 election, Mayawati's BSP had been wiped off, while SP managed to win 5 seats. Since Congress is contesting alone this time, it is going to be a triangular fight. Congress won 21 seats in the 2009 election. BJP along with alley Apna Dal swept 73 out of the 80 seats in UP in 2014.

Another consistent regional party is BJD in Odisha. It won 20 seats last time and has an average of 13.75 seats in the last four elections. In Bihar, BJP's alley Nitish Kumar's JDU has a better average than RJD--12.75 against 9.75. This time BJP-JDU alliance has anti-incumbency of state and centre. However, they are better placed. In Maharashtra, Shiv Sena has a better average than Sharad Pawar's NCP--14 Vs 8. Shiv Sena always aligned with BJP while NCP with Congress and the equations will be same this time.

Down South, Tamil Nadu is the biggest state with 39 constituencies where the regional parties DMK and AIADMK rule the roost. Like never before, Jayalalithaa's AIADMK swept 37 seats last time. This time both the political stalwarts, M Karunanidhi and Jayalalithaa are no more there. AIADMK has shrunk to a group of leaders fighting each other, while DMK is well positioned under MK Stalin, son of Karunanidhi. AIADMK aligned with BJP, while DMK with Congress. In Andhra Pradesh (25 seats), the fight will be majorly between Jagan Reddy's YSR Congress and Naidu's TDP, which broke its alliance with BJP. Jagan is the rising star in the state, while Naidu has the state anti-incumbency. In Karnataka, Congress has an alliance with Deve Gowda's Janata Dal Secular which gives them an edge over BJP. K Chandrashekar Rao's Telangana Rashtra Samithi (TRS), which swept the assembly election in December, is in pole position in Telangana against Congress. TRS won 11 out of 17 seats in 2014.

In nutshell, if Congress increases its share from 44 seats last time, it will be largely from BJP's kitty of 282, not from regional biggies'. Also, the share of regional parties looks to be more distributed this time.