Auto slowdown: The ones that lose less, win big

The first half of this financial year 2019-20, has been most forgettable for the domestic passenger vehicle industry Industry volumes have declined by nearly 24 percent, the most in a six month period ever. There has not been a single month this year when sales have not declined in double digits compared to last year. If sales continue to decline in the same manner in the next half of this fiscal, the industry will be pegged back by over 5 years and close out with volumes below the levels attained in 2014-15.

All of this is unprecedented and utterly homogenous. All the 17 manufacturers in operation in the country-with the exception of the two new entrants Kia Motors and MG Motor, have individually suffered a double digit decline in sales. It is something that has never been witnessed before and likely won't be repeated ever in future.

Manufacturers have their period of crests and troughs and depending on their product lifecycles, outpace or lag the industry. Even in a bullish market scenario there would invariably be some company that would have managed to hit a trough. Similarly, in a depressed market condition, some or the other player manages to grow and be the outlier. Not this time though. It is that kind of a market today. 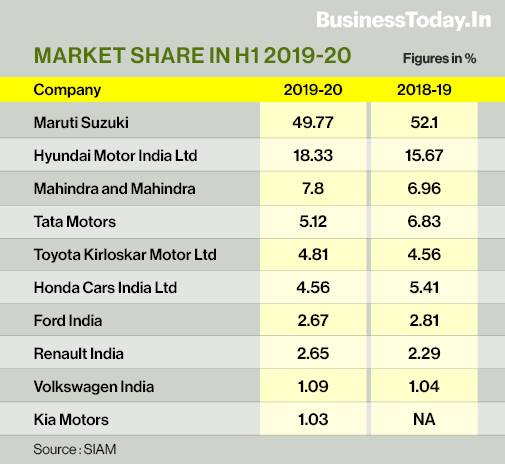 Yet, there are some that have declined less than the others, which has helped them improve their standing in the market-measured in this case by the respective market shares. Market-leader Maruti Suzuki has lost the most in this parameter. A 27 percent decline in sales in the April-September 2019 period against the same period last year, has seen the carmaker lose 2.33 percentage point market share-it has dropped from 52.1 percent to 49.77 percent. That is the most Maruti has lost in a six month period, barring the period in 2012-13 and 2013-14 when it had labour-related issues at its Gurgaon and Manesar factories.

Maruti's loss has almost entirely been gobbled up by arch rival Hyundai. The Korean carmaker itself has suffered a 10.85 percent decline in sales but it is the lowest fall for a company in this industry. Thanks to new launches like the Venue compact SUV and the compact hatchback Santro, Hyundai has seen its share go up by 2.66 percentage points from 15.67 to 18.33 percent.

There is some ray of hope though. The relative success of the new entrants and the long waiting period for their cars suggest there is still appetite among consumers to buy cars if the product is right. In just three of the six months under consideration that Kia Motors has been operational, it has managed to grab a market share of 1.03 percent. This is higher than companies like Fiat, Nissan and Skoda and almost at par with that of Volkswagen, companies that have been present in India for more than a decade.

It is time for everybody to introspect.