JioFiber STB vs Airtel Xstream: Here're the similarities and differences 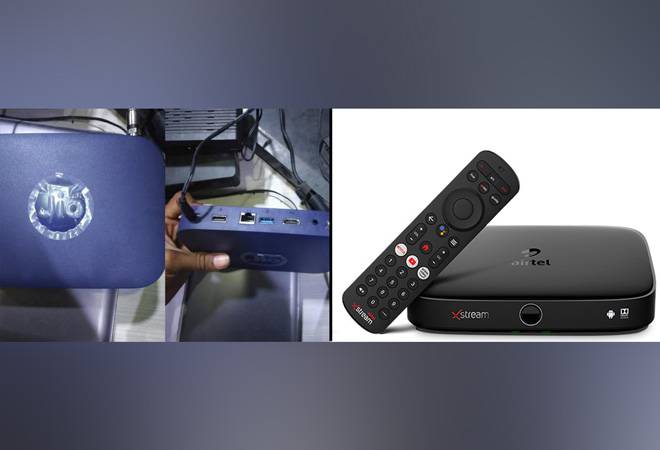 Reliance Jio is all set to commercially roll out its Jio Fiber services today. The company won't just be offering high-speed internet access to its subscribers but will also make its 4K set-top-box (STB) available to Jio Fiber users, which aims to provide ultra-high definition entertainment and cloud-based gaming. However, last week Airtel rained on JioFiber's roll-out plans by announcing an Android powered STB of its own called Xstream Box and Airtel Xstream Stick. Just like the JioFiber STB, Airtel's Xstream Box can also relay content from both OTT sources and from standard cable channels. But the STBs have a few similarities and a lot of differences. Lets take a closer look at both Airtel Xstream Box and JioFiber STB.

The Airtel Xstream box will offer one HD pack free on Airtel DTH. RIL, on the other hand, has acquired three leading cable Multiple System Operators (MSOs), Hathway, DEN and GTPL, and 30,000 local cable operators (LCOs) and won't have problems in offering the largest mix of HD channels to customers via JioFiber STB.

Airtel Xstream Box is an Android TV box and runs on Android OS. It will offer access to the Google Play Store and therefore, you will be able to download and stream content from OTT platform of your choice. Reliance Jio Set top box, on the other hand, is an all in one media powerhouse. Other than offering high-speed internet connection, JioFiber 4K STB also includes voice calling, video calling, gaming and conferencing services.

JioFiber STB supports video calling with up to four people simultaneously, something which the Airtel Xstream Box is unable to do. Jio is also offering its STB for free with the JioFiber subscription; on the other hand, Airtel Xstream is priced at Rs 3,999.

Jio set top box support online multiplayer gaming with zero latency. It also supports a wide variety of controllers including the app-based controller on your smartphone. The Jio Fiber broadband service will bundle games from many popular studios, including Microsoft Game Studios, Riot Games, Tencent Games and Gameloft. Meanwhile, Airtel's Xstream Box does not offer a gaming service similar to Jio but lets users download games from the Google Play Store and also lets them stream games to their TV since the box comes with Chromecast support. The Jio STB also includes AR/VR capabilities and will be looking to give tough competition to Goggle Stadia and Apple Arcade in India.

Also read: Buying a Jio Fiber connection? Here's why your existing DTH connection will be useless!

Will P Chidambaram land in jail or get relief from courts today?