Priced at Rs 4,990, Ubislate 7C+ is a smartphone tablet for the masses

With a price tag of Rs 4,990, this seven-inch tablet that can make phone calls, has to be cheapest device of its kind in the world.

Nandagopal Rajan
I have been an iPad user for over two years. So, every time I see another tablet, it is natural for me to compare it with the Apple device. However, that is an unfair comparison, for Apple was first to the race and still makes the best tablets.

But there is a substantial number of people who don't need an iPad and, frankly, will never be able to afford one. These are the people who don't have the luxury of looking from the top down and will have to buy the cheapest device in the market. But they too have the right to technology.

There are many devices that try to make existing technology affordable. But it is not always that a device touts its price as its innovation.

Datawind has been doing this for quite some time now, with its Aakash tablets supplied to the government as well as the non-subsidised Ubislate devices. The latest to come out of their stable is the Datawind Ubislate 7C+, which again is aimed at those who would be buying their first smart, connected device.

In fact, with a price tag of Rs 4,990, this seven-inch tablet that can make phone calls, has to be cheapest device of its kind in the world. To put the price in perspective, the Nokia Asha 501, a smart feature phone for the masses, will start selling for just over Rs 5,000. This, on the other hand, is a smartphone with a seven-inch screen but a cheaper price point. HARDWARE
This Ubislate certainly has better build quality than some of the earlier devices from the company. It is a bit thicker than other seven-inchers around. One edge is flat, unlike the other three which are curved, and this is where you will see the volume and power buttons. The micro-USB ports, SD card and SIM card slots are also nested here.

It is good to have everything around a point, but it gets a bit awkward when you are using this device as a phone. Then the volume keys are below, beyond your fingers' reach. The form factor is good enough for you to use it single-handedly as a phone. But the audio quality on the ear side is poor and you might need to use a hands-free when in a noisy environment.

Despite the price point, there is a TFT capacitive touch display. The touch is very responsive, though the screen looks a bit washed out with certain colours.

When you shift to a horizontal orientation, everything looks a bit skewed, like in one of those old Bruce Lee movies. There is just one camera on this tablet and that is front facing. It is good enough for you to make Skype and other video chats, as well as to use with apps. While the screen is okay to watch movies on, we don't think the speakers are all that loud.

Connectivity isn't a problem, as you can use a SIM to make calls and for data. But the cellular modem is quad-band Edge and not 3G. For 3G, you can use a dongle with a micro-USB converter. There is Wi-Fi too, though we experienced problems with some wireless networks not showing. PERFORMANCE
With a 1 Ghz Cortex A8 processor and 512 MB RAM, this tablet offers decent performance. You will be able to do all basic computing without any issues, though there is a split-second lag that is visible once in a while. The stock Android Ice Cream Sandwich OS works smoothly with the hardware. The Quadrant Benchmark score of 1866 is decent.

There are no OS tweaks, though Datawind has added some good apps of its own. For instance, the Ubislate browser uses a server in between to reduce your data consumption on this tablet. It crunches a 1MB page to about 30kb, giving a reasonable web experience. Though this is not very fast, as there is a server that comes between your device and the web, we think it will be an excellent value addition for the target audience. The browsing has been optimised for GPRS, so don't expect 3G speeds even when you have a 3G connection.

The tablet also comes with multiple apps that support e-learning and provide access to free content. At this price point, this connected tablet could be a game changer for the Indian education system. In fact, Datawind has proposed the Ubislate 7C+ for the next version of Aakash and is willing to supply the same at Rs 2,500.

The Ubislate 7C+ has a 3200 mAh battery that can give you three hours use on an average. But it won't last that long if you are just browsing. The good thing is that the company is going to sell solar chargers for as low as Rs 399. You will also need an extra SD card, as just 1.3 GB of the 4GB internal memory is available for the user. 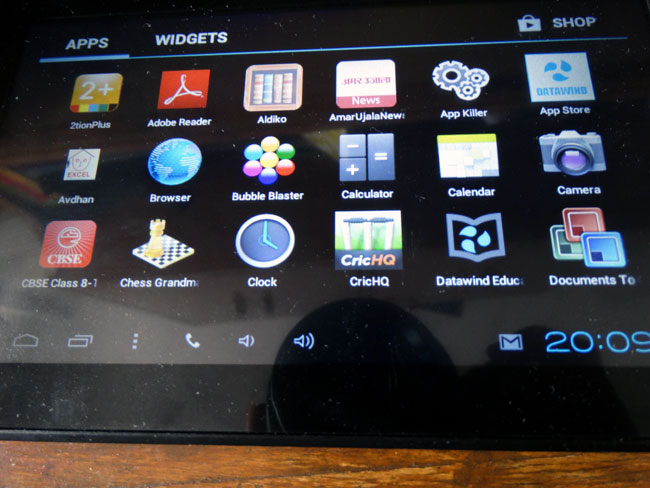 VERDICT
Well, this is not an iPad nor is it a spec-heavy Android tablet. But the Ubislate 7C+ is a very affordable connected device that works decently well and has the capability of changing the lives of millions of people who won't be able to afford anything costlier.

As a device that sells for just under Rs 5,000, or the $100 benchmark, this tablet can certainly be a game changer. For those who will struggle to afford the cheapest of smartphones, this device can give a smartphone and a tablet at the same price point.

We think this it can also be good learning tool for children and you don't need to give them costly tablets to take to school or play with.

The Ubislate 7C+ is a well-intentioned device that is good enough for the people who don't have much of a choice at the moment.
TweetYoutube
Tags: Ubislate 7c+ | Ubislate | Datawind | Aakash | tablet | smartphone

Samsung raises the bar with new range of smart TVs