Xiaomi Redmi Note 7 Pro review: Look no further for a phone under Rs 15,000 Redmi Note by Xiaomi has been the perfect mid-budget Android smartphone and with every successor, the company has been raising the benchmark. But with the Redmi Note 7 Pro coming less than six months after the Redmi Note 6 Pro, does Xiaomi has enough to justify the upgrade?

This is a well-designed smartphone with a 6.3 inch bezel-less display dominating the front, neatly placed buttons and ports on the side panels and a vertical-dual camera along with finger-print scanner at the rear. But hasn't this been the case with earlier Redmi Note devices too? Of late, Xiaomi has lacked design innovation. Especially, when competitors such as Asus, RealMe and Honor, have been experimenting with glass rear with innovative patterns and 3D effects. But with the Redmi Note 7 Pro, Xiaomi seems to have bounced back and that too in a big way. Available in two gradient colours-Nebula red and Neptune blue-the phones look stunning. Referred as Aura design, Xiaomi claims to have used a six-layer process to achieve the gradient. And if these colours are too bold for you, the rear cover added to the retail box tones it down a little. Or else, you can pick the black variant, which is subtle yet looks equally premium. Topping the great looks is the P2i nano coating and the addition of the custom rubberised material, which makes it splash resistant and protects liquid from seeping in. The Redmi Note 7 Pro actually survived the unexpected Delhi rain. But it might not survive a dip in the pool. 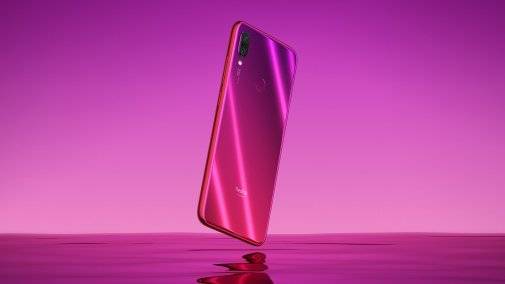 Moving to the front, the 6.3-inch full HD+ display extending to all the sides appears bright and crisp. I had to turn up the brightness to full when using it under sunlight. The dot-notch housing the selfie camera does not hamper the user experience. There is an option to hide the notch, but it brings back a thick bezel to the top. Within the full-screen display settings, the device shows the list of apps that work best in full-screen mode. The front, just like the rear, is protected by Corning Gorilla Glass 5, yet is prone to scratches. Adding a tempered glass at the front will be a good idea as the review unit was scratched by the diamond earning while answering a call. For navigation, on-screen buttons have been turned on by default, which can be replaced with full-screen gestures at any time. With this big screen, I personally think gestures come in handy. I am not a big fan of Mi user interface but the MIUI 10 seems to be rather polished. While the apps continue to be spread across multiple pages on the home-screen, hitting the multi-tasking button shows options split screen option, shortcuts for cleaner, security scan, deep clean and manage apps, along with all the running apps in the background. And long press the home button activates Google Assistant. For those who find capturing screenshots a little difficult, tapping on the screenshot shortcut from the notification bar instantly captures one. All necessary apps such as contacts, calculator, screen recorder, scanner, downloads and more are stacked neatly under tools folder. The security app gives quick access to remove trash, run a security scan, app lock, learn about battery and data usage, and more.

One thing I have always loved about Redmi Note devices is the inclusion of IR Blaster with Mi Remote. I was able to control my TV, set-top box, air conditioner and many other appliances using this phone. All I had to do was to add the appliance details to fetch the compatible remote. This feature comes in handy in summers when the air conditioner remote is not around. Moreover, the list of compatible devices is huge and is constantly being worked upon.

The portrait mode for bokeh images is good at edge detection-focuses on the subject while blurring the background. Even while using the portrait mode, I was able to choose between the filters, beauty settings or studio lighting options such as natural, stage, movie, rainbow, and more (works on a human face). What's even more interesting is the editing option for portrait images. I was not just able to adjust the background blur but could add studio lighting. Using light trails, I was able to add some sort of movement in the background and save it as in an image or video format.

AI camera setting is available in the photo as well as portrait mode. The images captured using the Redmi Note 7 Pro are sharp and retains details, and the colours look vibrant. The dedicated night mode comes in handy while capturing images in low-light settings, which captures pretty decent images. But they are not completely noise-free. The 13-megapixel front facing camera is decent enough to capture social media ready images.

Overall, the Redmi Note 7 Pro has one of the best cameras in this price category.

The Redmi Note 7 Pro scores equally well on performance front as well. It performed smoothly with multiple apps running in the background. Streaming videos was a delight and there wasn't any lag while playing games either. But the device started to heat after a few minutes of playing games such as Battlefield and PUBG. However, our review unit wasn't running the final retail unit software. The device is powered by Qualcomm Snapdragon 675 processor paired with 4GB of RAM and 64GB internal storage. Although it is a dual SIM phone, the secondary SIM slot is a hybrid one and can be used for microSD card as well.

Battery: It took Xiaomi a little long, but the company has finally incorporated a Type-C charging port. The 4100mAh battery supports Qualcomm Quick Charge 4 but the 10W charger, bundled in the box, isn't compatible for fast charging. It usually takes close to two and a half hours for a full charge that lasted me over a day of average usage.

If you are looking for a good smartphone under Rs 15,000, look no further. The Redmi Note 7 Pro priced at Rs 13,999 is one of the best smartphones you can buy. It looks stunning, has a great camera, good performance, and an impressive battery backup.