The bone of contention is the timeline for the transition to electric mobility.
Sumant Banerji

The transition from conventional internal combustion engines to electric motors for the domestic automotive industry was never expected to be smooth. A disruption as large as this where the architecture of the modern automobile itself sees widespread changes is unprecedented and comes with its own share of pain. The fault lines between what the government of India wants and how much the domestic industry is willing to take, is only becoming more glaring now.

The gulf between the two became starkly evident in a meeting earlier this month between Niti Aayog that is spearheading policy making for electrification of transportation in the country and industry leaders. Eager to set the ball rolling, the government has made many radical proposals in the past-from higher taxes on petrol and diesel vehicles, to swapping batteries, incentivising lithium-ion battery manufacturing and even an outright ban on conventional vehicles. While the focus thus far has largely been on passenger vehicles-the category that attracts maximum headlines, it has now begun to bring under its ambit two-wheelers that are the biggest segment in India by volume. The bone of contention is the timeline for the transition. Niti Aayog wants a complete transition to electric for all three-wheelers in the country by 2023 and for the bread and butter two-wheelers with engine capacity less than 150cc-nearly 90 per cent of two-wheelers sold in the country today are in this category-by 2030. The industry is fragile right now battling a slowdown in demand while at the same time adjusting to the more stringent safety norms that kicked in recently. Not too far in the future, it will also have to brace itself for impending BS VI emission norms having leapfrogged, at the government's behest, the BS V version. Come April 2020, India's two-wheelers as a conventional gasoline consuming automobiles will be one of the cleanest in the world in tail pipe emissions. There is too much on the plate for the industry to start thinking about 2030.

"The auto industry globally is still a long way away from all of this, as is India. To force an unrealistic deadline for mass adoption of electric two and three-wheelers, will not just create consumer discontent, it risks derailing auto-manufacturing in India that supports four million jobs," says Venu Srinivasan, chairman and managing director, TVS Motor Corp, India's third largest two-wheelers maker. "We need gradual and seamless adoption of electric vehicles (EVs) to avoid such collateral damage and ensure our technology-driven disruption is positive and lasting."

ALSO READ: BT Buzz: As L&T acquires 60%, what lies ahead for Mindtree and its founder

An electric motor powered by a lithium-ion battery pack replacing the conventional engine and the gasoline tank is a much simpler technology that reduces moving parts in an automobile and significantly cuts down on the carbon footprint of machines. For a country like India, which is one of the biggest importers of crude oil-211.6 million tonnes worth $111.9 billion in 2018-19, while being one of the most polluted regions in the world-it accounts for 14 of the 15 most polluted cities in the world, it is a win-win solution.

Electrifying two and three-wheelers also promises to be far simpler than cars, trucks and buses for a variety of reasons. These vehicles are largely used for short distance commutes within the city, which means they do not need an extraordinarily large battery with high range. Lighter batteries thus required also mean both lower price and ease of battery swapping that at least partially solves the problem of lack of charging infrastructure in the country. Yet, the extent of changes required and to match the government's timeline at the same time, makes the industry nervous.

"This move (towards EVs) will be critical because it impacts an industry that is a significant contributor to the country's GDP and is a large creator of jobs. It also puts the industry, manufacturers, and customers in unfamiliar territory, as the automotive ecosystem all over the world is still only beginning to understand the development and applications of EV technologies," says Pawan Munjal, chairman, managing director and CEO, Hero MotoCorp. "In such a scenario, coming close on the heels of the implementation of BS-VI norms in 2020, this move could have serious implications on the industry and the millions who are dependent on it. Therefore, we propose a more cautious, clear and realistic roadmap towards the adoption of EVs. The scale and timing of the adoption need prudent deliberations and we will gladly support all stakeholders in this process."

The automotive industry is known to lobby hard but even then the unanimity that the threat of electrification has brought among companies as diverse as truck and car makers to two and three-wheelers, is rare. It is however not unexpected at a time when there are no signs the government will back off or soften its tone.

"It is the second nature for any industry to resist as much as possible any change that makes them venture out of their comfort zone and reinvent themselves. But it is not us (the government) that ushers this change. It is already happening globally," said an official who was present at the Niti Aayog meeting. "All we are saying is that the industry needs to adapt and find solutions for India as soon and not as late as possible. We are dependent on imported crude and are also concerned about our environment. We also want to be world leaders in this new area."

"If we do not push the industry they will never change. Look at what happened with BS VI (emissions). They all complained initially but are now doing it," he added. "Of course we will take their views into consideration but we may not agree with everything that they say."

For now, the EV story in India has largely been led by a clutch of start-ups like Twenty Two Motors, Okinawa scooters, Hero Electric, Tork Motors and Ather Energy that have sprouted over the last few years. More are on the way. Earlier this month, Revolt Motors that was founded by Rahul Sharma of Micromax fame (founder) unveiled its first electric mobike RV400 that has a rated range of 156 kilometers and a top speed of 85 kmph. But the journey would only begin in earnest once the established players like Hero MotoCorp, Bajaj, TVS and Honda enter the fray.

"Automakers everywhere are supportive of the overall goal of introducing EVs and easing consumers into electric mobility," said Srinivasan of TVS. "As a result we have been doing serious development work to ensure we can offer a mass market EV product that delivers on safety and high performance. This is necessary to co-opt consumers into making a switch, so it's driven by consumer willingness and, therefore, adopted easily and widely. The supporting infrastructure for charging also needs to be as robust as conventional fuel options."

More than five years after the first attempt at a policy to encourage use of alternate fuel technology was put in place in 2013 by the previous UPA government, penetration of EVs in the country continues to be abysmally low. Nearly 7,59,000 electric vehicles were sold in India in 2018-19 with electric three-wheelers accounting for a majority 6,30,000 of them followed by electric two-wheelers at 1,26,000 and electric cars at just 3,600. This translates to less than 3 per cent of the overall industry sales across categories. 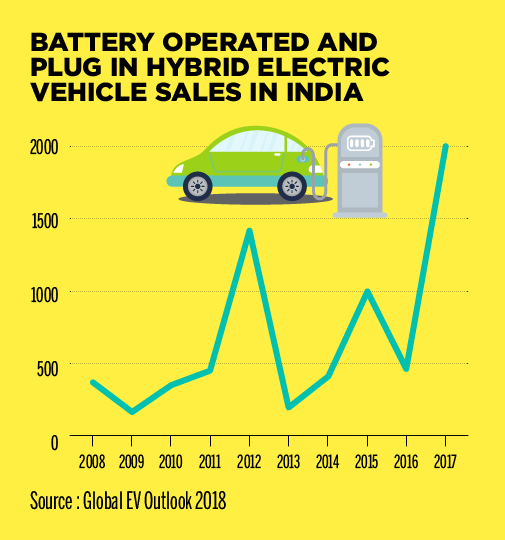 Over the last few years, the government has taken some steps to spur the nascent EV industry in India. The tax on lithium-ion batteries was reduced to 18 per cent last year and there is talk of reducing GST on electric vehicles to 5 per cent from the current 12 per cent. Besides, the road transport ministry has also proposed an exemption of registration fees for battery-operated vehicles. Yet there is widespread feeling that these may not be enough. Globally, electric vehicles have been grandfathered by government through massive fiscal incentives and subsidies. India does not seem to enjoy the fiscal headroom to replicate that. Worse, the overall taxation in the supply chain where raw materials are charged more than the end product has created an inverted duty structure that is difficult to circumvent in an input credit-based tax structure like GST.

"We would like the Centre to review the current taxation framework applicable on raw material and the final product. There is an inherent inverted duty structure as the GST input on raw materials and other overheads are on average of 18 per cent wherein the output is pegged at 12 per cent. The proposed reduction of the GST on EVs to 5 per cent will increase this delta," says Tarun Mehta, CEO and co-founder Ather Energy. "This structure results in significant working capital blockage. Even with the existing GST inverted duty refund framework in place, there is working capital blockage on overheads and capital investments. A comprehensive GST refund structure of electric vehicle manufacturers or a reduced GST liability on the raw material should be assessed for seamless cash flows in the long run."

The need for a comprehensive policy that is consistent and well graded is still being awaited. There is talk of the government increasing the subsidy on electric two and three wheelers to up to Rs 1 lakh per unit, which would be a significant increase over the current range of incentives but the talk of banning existing vehicle technologies has not gone down well with the industry.

"I am 100 per cent in favour of all monetary and other incentives to enable the transition from ICE (internal combustion engine) two and three-wheelers to EVs, which are being vigorously developed by every ICE OEM (original equipment manufacturers) without exception," said Rajiv Bajaj, managing director, Bajaj Auto. "I'm also 200 per cent opposed to any mandatory ban of ICE two and three-wheelers as the unshakeable fact is that our industry is world class for it makes the lowest emission and highest fuel efficiency vehicles in the world, exports every year over 3 million vehicles worth about $3 billion, and employs at home across its supply chain one million people whose contribution to India's GDP is anything but insignificant."

Even those that are making EVs find the timelines a tad unrealistic. The government for example wants lithium-ion cells to be locally manufactured in the country as a precondition for some of incentives. That cannot happen overnight.

"Under the Phased Manufacturing Project, the timeline to source indigenous electric motors has been set for April 2020. This will need to be extended by six-nine months to account for the validation and certification of components and vehicles," says Mehta of Ather Energy. "Similarly, the timeline to localise lithium-ion cells by April 2021 will not be sufficient for manufacturers to scale to meet demand and should be extended to 2023."

For now, the most important voice in this, that of consumers, is missing.