Tata Consultancy Services (TCS), country's largest software services exporter recorded a double-digit growth for the fourth consecutive quarter with dollar revenues of $5,485 million and a constant currency growth of 10.6 per cent year-on-year. The EBIT margin stood at 24.2 per cent versus 25 per cent in the corresponding quarter last year. Total digital revenues, which now stand at around $7 billion, made up for 32.2 per cent revenues this quarter, up 42 per cent year-on-year. TCS also added four new clients in the $100-million client bucket, taking the active client count to 1014. Revenue growth in verticals was led by Life Sciences and Healthcare at 18.1 per cent while other verticals such as Retail and CPG grew at 7. 9 per cent, Communications and Media at 8.4 per cent, Technology and Services at 7.8 per cent and Manufacturing grew at 5.5 per cent.

However, the softness in the BFSI vertical continued for the third straight quarter, which contributes close to one-third to company's revenues. BFSI vertical grew by a subdued 0.4 per cent quarter-on-quarter (Q-o-Q) in dollar terms and declined 0.8 per cent Q-o-Q in rupee terms. Rajesh Gopinath, CEO and MD of TCS said that the company had called out the weakness in BFSI vertical earlier though the continued softness was not anticipated and the company is currently in a wait-and-watch mode to see how it progresses. "From a short to medium term perspective, we don't see anything new out there," said Rajesh, speaking on the vertical's visibility. The weak growth in the BFSI sector, which the company said was more pronounced than what it had factored in has been something that analysts had called out in the beginning of the year. A Nomura report on IT services earlier this month noted that the global tech spending in BFS was likely to moderate largely due to weaker client financials in US and Europe in Q1CY19 and a softer outlook on business, especially in the capital markets segment. The said report also stated that the risk for BFSI rested in "weak macro with slowing GDP growth across key markets in CY19 versus improving last year, uncertainty around interest rates compared to at the start of CY18, rising trade-war concerns and impending risks from Brexit". Even as TCS is in a wait-and-watch mode, analysts believe that  BFS spending in Europe and US could see clients flattening out of tech budgets as they look to increase efficiencies from existing tech budgets and repurposing spends towards 'change' than 'run' part of their businesses. With the Indian IT sector having a higher exposure in legacy business of the BFS even as the digital  transformation deals are coming by,  a weaker macro environment and flattening out tech budgets by BFS companies  is not something that any of the IT services players including TCS are looking forward to . "If Q2 comes in strong as typically Q2 does, then we will be well set for the double digit growth.  Otherwise, we will be pushing it to H2, which is not a comfortable space," said Rajesh, commenting on the company's aspiration to maintain its double-digit annual growth. TCS  also made an addition of 12,356 employees in Q1 of FY20,  highest in five years, taking its total headcount to 436,641 from 424,285 at the end of fiscal 2019. Rajesh Gopinath, CEO and MD, TCS told analysts that accelerated hiring was a reflection of the medium-term outlook on the demand environment. "As we are participating in the transformation journey of our customers by staying relevant and gaining market share, we are excited about bringing on board the talent in line with our philosophy of emphasising on home-grown talent and getting the capacity up, trained and ready  as we see the demand unfolding," he said, adding that 40 per cent of 30,000 people - for whom offer letters had been rolled out - have been on-boarded in the first quarter while the rest of the on-boarding is expected to be completed by the next quarter as against a year long process earlier. Indicating a larger shift in the way the company is looking at talent and the integration of them into various business units, Rajesh said, "We are coming through a fairly re-imagined both on the hiring and the initial training program front, significantly leveraging the digital infrastructure." Currently TCS has 315,000 employees trained on digital skills and 365,000 employees agile trained. TCS noted that its ability to absorb trainees in such large numbers is mainly due to shift from physical training facilities to complete digitisation of training programs. Rajesh said, "We are providing this training as a series of nano courses, which can be integrated  through their work cycle." The company along with TCS National Qualifier Test or TNQT and the digital training now hopes to get the fresh talent ready to move to projects on demand basis. TCS's record hiring also comes on the back of IT industry seeing an increasing cost of sub-contracting and the talent supply crunch . TCS's cost of revenue, which includes employee cost and cost of external consultants rose  to $3,265 million or 59.92 per cent of total revenues from $2.961 million or 58.62 per cent of revenues in  the corresponding quarter last year. On the increased cost of subcontracting, Rajesh said, "It has been on that trajectory for some time now, it's a reflection of an increasing tight supply situation in our core market." 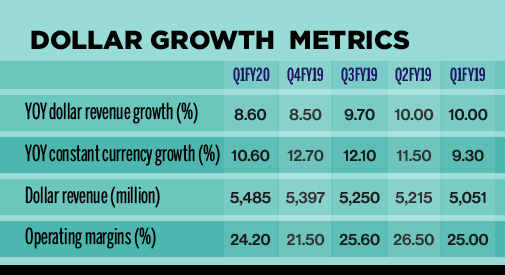 ALSO READ: BT Buzz: As L&T acquires 60%, what lies ahead for Mindtree and its founders

TCS has long maintained a practice of returning 80 to 100 per cent of its free cash flow to shareholders. The company completed its second consecutive buyback in September 2018 of Rs 16,000 crore with TCS  buying 76,190,476 equity shares at a price of Rs 2,100 per equity share. The offer size of the buyback was 21.54 per cent of the aggregate paid-up equity share capital and free reserves of the company representing 1.99 per cent of the total issued and paid-up equity share capital. It did its first ever buyback in FY18. In FY19, TCS made a net profit of Rs 31,472 crore with a net margin of 21.5 per cent, generating a free cash flow of Rs 26,461 crore. The Company returned Rs 29,148 crore to shareholders last year  in Rs 13,148 crore as dividends, and Rs 16,000 crore through the share buyback, which was equivalent to  110.2 per cent  of the free cash flow. Over the last five fiscal years between FY15 and FY19, TCS  used 70.8 per cent of its cash as shareholder payouts,  while investing 20.6 per cent in invested funds and 8.3 per cent and 0.3 per cent on capex and acquisitions, respectively. 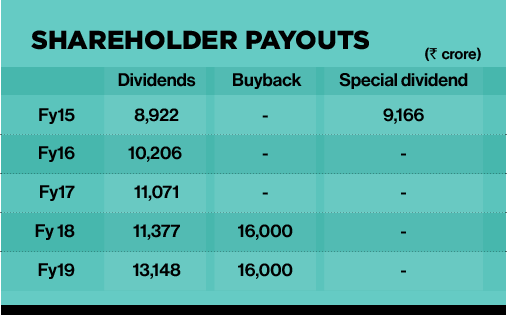 Indian IT companies stepped up their payout ratio over the last two-three years using a mix of dividend and buyback as compared to largely dividends. However this year's full Budget has brought in a double whammy to the sector. One, bringing down the promoter holding to 65 per cent and two, proposal to levy 20 per cent on buyback of share, which analysts see impacting how IT services companies look at the way it manages cash. Particularly in the case of TCS  - which has been generous with its shareholders - the biggest beneficiary of these payouts has been Tata sons, the principle holding company and the promoter of Tata group companies . It holds 72.05 per cent stake in TCS.

However, Budget analysis report by brokerage Edelweiss Securities noted that the terminal value of tax expenses for TCS buybacks would work out to be Rs 30,000 crore, which is about 3 per cent of the company's market capitalisation.  Analysts have maintained that a structured buyback program, much like Accenture would provide sustainable earnings per share and improve return on equity.  Kotak's IT services report noted that the amendment to the Income-Tax act has made structured buyback programs difficult. It also said that the additional tax burden of 20 per cent for buybacks will become EPS neutral.