Stake sale in 5 PSUs: Will the govt be fourth time lucky in achieving its divestment target?

With only four months left for this financial year to end, and Rs 87,635.7 crore of the target still remaining, will the Modi government be fourth time lucky? The Cabinet gave in-principle approval for strategic divestment of govt's 53.29% stake in BPCL

The Cabinet on Wednesday gave in-principle approval for strategic divestment of the government's 53.29 per cent stake in BPCL, along with transfer of certain management control. This is excluding BPCL's equity share holding of 61 per cent stake in Numaligarh Refinery, based in Assam. Apart from BPCL, the government has also approved disinvestment in four other central public sector enterprises (CPSEs) - 63.75 per cent in Shipping Corporation of India and 30.8 per cent (of 54.8 per cent) in Container Corporation of India to be sold to a strategic buyer, while 74.23 per cent in THDC and 100 per cent in North Eastern Electric Power Coporation Limited (NEEPCO) to NTPC.

So far, during the financial year 2019-20, Rs 17, 364.3 crore has been obtained through disinvestment transactions. This includes Rs 1,114 crore through IPO proceeds of Rail Vikas Nigam and Indian Railways Catering and Tourism Corporation and over Rs 14,000 crore mopped using ETF route. The government had set a target of Rs 90,000 crore in the interim budget that was revised to Rs 1,05,000 crore. 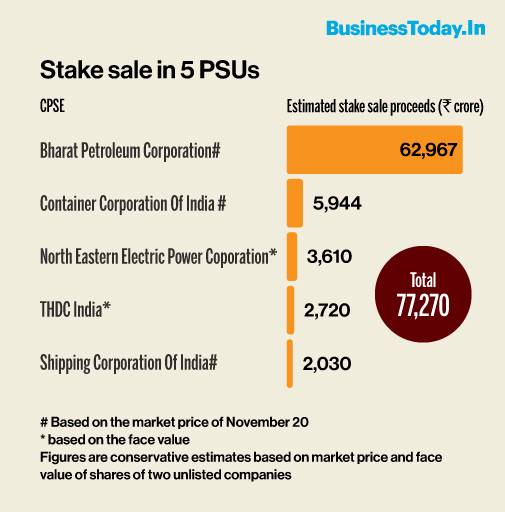 With only four months left for this financial year to end, and Rs 87,635.7 crore of the target still remaining, will the Modi government be fourth time lucky? The answer may not be easy to find but going by current market prices, some estimates can definitely be drawn. At current market prices (November 20), stake sale of government's 53.29 per cent (excluding Numaligarh) in BPCL could garner around Rs 60,000 crore. This is expected to cover approximately 72 per cent of the remaining disinvestment target. Stake sale of 10.8 crore shares or 30.8 per cent of Container Corporation Of India and 63.75 per cent in Shipping Corporation of India could fetch an additional sum of Rs 7,974 crore. Since the other two entities are unlisted, the face value of their shares could take the total a little over Rs 77,000 crore and the target could fall short by 10,366 crore . This could potentially increase as these are conservative estimates based on face value and current market prices. Although no time-frame has been announced for these strategic sales, these are expected in the current financial year. It remains to be seen how smoothly and successfully these stake sales take place. OTET result 2019 announced by Odisha Board of Secondary Education, here's how to check on bseodisha.ac.in