After spending hours on various locations in the PUBG world, Nourhan announced on Twitter that he has found his life partner. 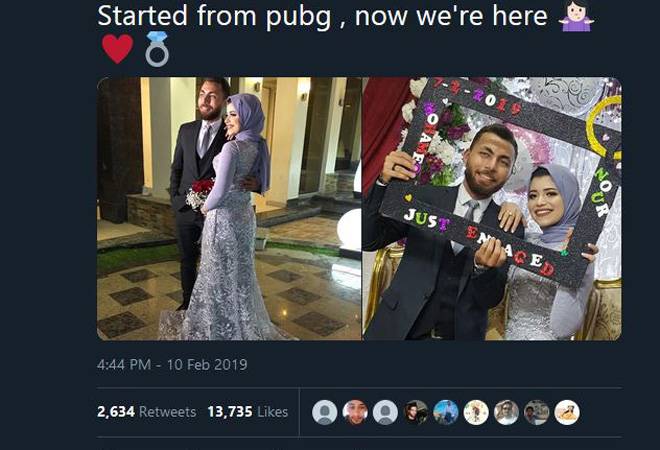 PUBG is a violent game where the last man standing wins. The game has off late come under the scanner of the authorities and is being heavily criticised for its negative impact on children. The Gujarat government has banned the game and issued a directive to various primary schools towards keeping kids away from PUBG. The J&K Students association has termed the multiplayer battle royale game as "future spoiler".

But every cloud has a silver lining and PUBG has one too. Recently, the multiplayer battle royale game played cupid and got two players to fall in love. The heart-warming story came to light after Nourhan-al-Hashish from Zagazig, Egypt announced his engagement on Twitter. Nourhan-al-Hashish used to play the game with his squad against other players. In one of the matches, he met his future partner. After spending hours on various locations in the PUBG world, Nourhan announced on Twitter that he has found his life partner.

In one of his Tweets, Nourhan-al-Hashish wrote, "Started from PUBG, now we are here". The announcement on Twitter has since gone viral and has been retweeted over 2,600 time and liked by over 13,700 people.

There is another story about a couple, Salwa and Rasheen, whose marriage was saved by PUBG. Both of them were separated by distance but PUBG brought them closer. They teamed up for the game and eventually got over their differences.

Even PUBG has braced itself for the Valentine's Day. The game has introduced new costume items to celebrate the day of love. These include various items in red, pink and white colour schemes. The outfits include Killer Angel Set, the Smiley Heart Suit and the Deadly Sweetheart Headband. There are also Valentine's Day gun skins - Frilly SKS and Deadly Sweetheart QBU.

Meanwhile, PUBG Mobile is all set to bring the new update 0.11.0 for the lovers of the game. The update will bring together PUBG Mobile and Resident Evil 2 and let the gamers fight against the zombies. The stable version of PUBG Mobile 0.11.0 isn't out yet and will only be available by the end of February.