Adani announces Rs 55,000 crore investment in Gujarat in next 5 years

Speaking at the 9th Vibrant Gujarat Summit here, Adani said his group's investments in Gujarat in the past five years exceed Rs 50,000 crores and "we are further accelerating our investments." 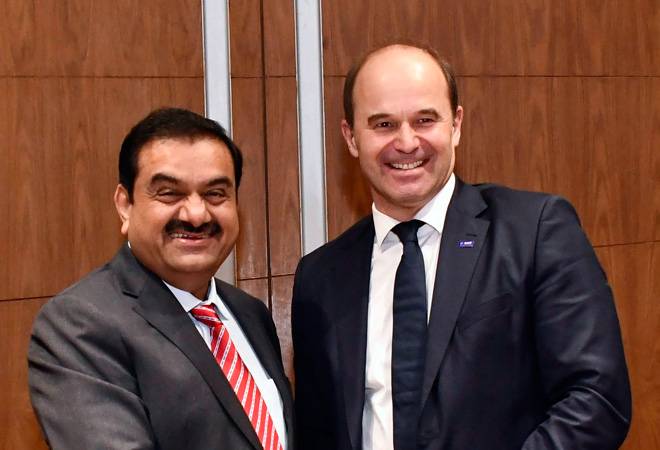 Gautam Adani, (left), chairman of the Adani Group, with Martin Brudermuller, BASF SE Chairman of the Board of Executive Directors after signing an MoU to evaluate a joint investment in the acrylics value chain, in Mundra town of Gujarat. (Picture credit: PTI)

Billionaire Gautam Adani Friday announced over Rs 55,000 crore investment in next five years in a clutch of projects in Gujarat including the world's largest solar park, a copper plant, a cement unit, and a lithium battery manufacturing complex.

Adani Group, which operates Mundra port in the state, had Thursday announced plans to foray into petrochemical business with a Rs 16,000 crore project with German chemical major BASF. Speaking at the 9th Vibrant Gujarat Summit here, Adani said his group's investments in Gujarat in the past five years exceed Rs 50,000 crores and "we are further accelerating our investments."

Also Read: Adani to foray into petrochemicals in Ambani's backyard

"Over the next 5 years, our investments will include the world's largest solar hybrid park in Khavda. The anticipated investment in this park is Rs 30,000 crore. "We also plan to establish a 1 GW Data Center Park in Mundra, a one million ton copper smelting and refining project, a cement and clinker manufacturing unit in Lakhpat, an integrated Lithium battery manufacturing complex and expand our Photovoltaic manufacturing capabilities. Overall, we anticipate a total of Rs 55,000 crore of investment in all these projects," he said.

This will lead to the creation of over 50,000 new direct and indirect jobs in the state. The Rs 55,000 crore investment announced Friday does not include the petrochemical plant Adani plans to set up in a joint venture with BASF at Mundra.

Adani praised Prime Minister Narendra Modi's vision saying he has "fundamentally restored confidence across the world that India will be the key engine for global economic growth." "Your (Modi's) ability to stabilise the economic fundamentals with low inflation rates, strict management of fiscal deficits, introduction of the largest tax reform since independence (GST), establishing the bankruptcy code, and strong relationships with key nations across the world has cemented India's place as one of the best nations to invest in," he said.

India had made an unprecedented 53 point jump on the ease of doing business index and has become the world's fastest-growing economy, he said. "And India under your (Modi's) watch will become one of the world's top five economies in 2019."