India, the 7th largest hydropower making country in the world, had an installed hydro capacity of around 45,400 MW by end 2018

. Contracts for construction of the powerhouse though are yet to be awarded and NHPC expects the project to be completed by 2QFY24", said the Motilal Oswal report
PB Jayakumar

While solar power capacity additions are slowing down, another major renewable energy hydropower capacity addition plans are also in a major limbo in the country. The public sector National Hydro Power Corporation (NHPC), India's premier hydropower company, with a total installed capacity of over 7000 MW generating from operating 24 power stations, will not be able to add new capacities, at least by 2022. At present NHPC has only two new projects that can reach power production stage in near future - an 800 MW Parbati Hydroelectric Project (Stage-II) a run-of-the-river project in river Parbati and a 2000 MW Subansiri Lower hydroelectric project, the biggest hydroelectric project undertaken in India so far, another run of the river scheme on river Subansiri at North Lakhimpur on the border of Arunachal Pradesh and Assam. 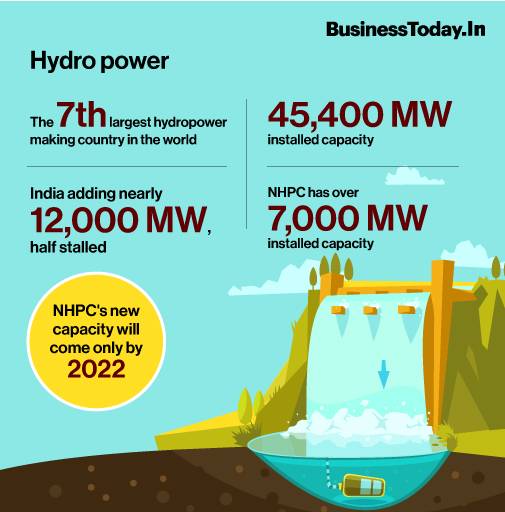 India, the 7th largest hydropower making country in the world, had an installed hydro capacity of around 45,400 MW by end 2018. The annual growth in capacity last year was just 1 per cent, which was the lowest since 2009. It is estimated that about 35 hydel power projects of 12,000 MW are under construction at various stages, but at least half of them worth over 6,000 MW have been stalled due to many issues from environmental issues to local protest, land acquisition and funding.

As per the earlier plans, NHPC Limited had drawn up an ambitious plan to add about 6,000 MW of hydropower capacity by the end of the year 2022. The last hydropower project the public sector company commissioned was in April 2018, a 330 MW Kishanganga Hydroelectric Project in Jammu & Kashmir.

The major works in 800 MW Parbati-II are being done, except completion of a tunnel, where NHPC is facing geological challenges. The project is part of the 2,013 MW Parbati project, Asia's biggest hydropower project, which was initiated in 2000. The Parbati-1 project has not taken off so far. Parbati-II continues to face geological challenges and the company expects the project to be commissioned only in FY22, brokerage firm Motilal Oswal noted in a recent analyst report.

The report also said NHPC has restarted works of Subansiri Lower, which had stopped construction activities since 2011 due to local agitation. "We have positive expectations about restarting the 2000 MW Subansiri Lower H E Project, and we are in a position to complete the project within 3 and half to 4 years of the restart", NHPC chairman and managing director Balraj Joshi had said in a television interview a few months ago.

"Construction on NHPC's Lower Subansiri II has restarted from October. Contracts for construction of the powerhouse though are yet to be awarded and NHPC expects the project to be completed by 2QFY24", said the Motilal Oswal report.

NHPC, which took over 500 MW Teesta VI hydroelectric project on Teesta River from Lanco for near Rs 900 crore a few months ago, also had recently signed a Memorandum of Understanding with the Himachal Pradesh Government for the execution of 449 MW Dugar HE Project. Teesta VI is expected to be completed in five years as the project requires the construction of two tunnels, which will take time given the difficult geographical conditions. It takes around 8-10 years to construct a hydropower project and costs nearly Rs 10 crore per MW, whereas solar or thermal capacity costs less than Rs 2.65 crore and Rs 4.5 crore per MW respectively.

Cost overruns, time delays due to geographical challenges and land acquisitions have historically delayed most of the hydropower projects in India for many years. The Central Electricity Authority had earlier assessed economically exploitable hydropower potential to the tune of 1,48,700 MW of installed capacity in India, which is ranked 5th in the world in terms of exploitable hydro-potential. In addition to this, the CEA had felt India can add 94,000 MW of pumped storage and hydro-potential from small, mini and micro schemes to the tune of 6,782 MW from 1,512 sites.

For the last financial year, NHPC had revenues of Rs 8697 crore with net profits of Rs 2630 crore.