According to a note issued by Niti Aayog after the meeting, all the attendants agreed that high frequency indicators are showing signs of a strong economic recovery, and that too earlier than expected 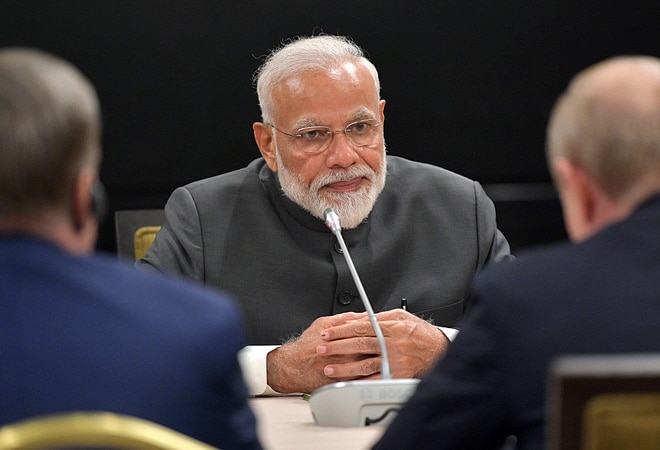 Prime Minister Narendra Modi on Friday highlighted the fiscal and reform measures undertaken by the government following the COVID-19 outbreak as he held deliberations with top economists who pitched for pushing privatisation, avoiding challenging international arbitrations and increasing infrastructure spending.

Participating in a virtual meeting with the Prime Minister, some economists suggested that the government could take a lenient view on fiscal deficit in the forthcoming Budget for 2021-22 due to the urgency to revive the pandemic-hit economy, sources said.

According to a note issued by Niti Aayog after the meeting, all the attendants agreed that high frequency indicators are showing signs of a strong economic recovery, and that too earlier than expected.

"The attendants were broadly in agreement that next year will see robust growth and suggested measures to maintain this growth rate to drive India's socioeconomic transformation," it said.

In his concluding remarks after the two-hour long meeting, the Prime Minister highlighted that together with a fiscal stimulus, the government also tried reform-based stimulus, which was seen in historic reforms in agriculture, commercial coal mining and labour laws.

Modi further said the COVID-19 pandemic and the subsequent management threw up new professional challenges for all those involved.

"The prime minister explained his vision behind an Atmanirbhar Bharat, where Indian companies are integrated in global supply chains in a manner not seen before," it said.

"The prime minister ended his talk by stating the importance of partnerships in achieving our goals, and that such consultations play a crucial role in setting the broader economic agenda," the note said.

According to the sources, the participants urged the government to come up with policies to increase exports and build investors' confidence as despite multiple structural reforms across sectors, investments are still not flowing into India in a big way.

"There is a need to boost investor confidence. Government should avoid challenging everything (international arbitration awards). This is important as investors are still wary of investing in India despite several reform measures," one of the sources present in the meeting said.

The speakers also stressed on the need to raise India's tax-to-GDP ratio, which is declining since 2008, embark on import tariff rationalisation and undertake bank recapitalisation.

Some participants also pitched for creating a separate ministry for privatisation of PSUs and assets, if needed, as was the case earlier.

The note said the participants highlighted the strong structural reform measures that have been undertaken in the past few years and how they would help in the creation of an 'Atmanirbhar Bharat'.

"Suggestions were made by participants on future reform areas...Participants also highlighted the need to tap household savings as a potential avenue to secure long-term funding for infrastructure projects," it said.

According to the note, the participants also stressed the importance of investing in public health and education, as human capital would also likely emerge as a driver of growth, especially in the knowledge economy going forward.

The meeting assumes significance as it was held ahead of the Union Budget to be presented by Sitharaman in the Lok Sabha on February 1. Some of the suggestions are likely to be considered by the minister while preparing the budget proposals.

According to sources, several economists suggested that the government should focus on export promotion as it was essential to boost domestic manufacturing. The sectoral experts underlined the need for more steps to increase investor confidence.

India's GDP is estimated to contract by a record 7.7 per cent during 2020-21 fiscal as the COVID-19 pandemic severely hit the key manufacturing and services segments, as per data released by the National Statistical Office (NSO) on Thursday.

According to the Reserve Bank of India (RBI), India's economy is projected to contract 7.5 per cent in the current fiscal ending March 31, 2021, while the International Monetary Fund (IMF) and World Bank have estimated the contraction at 10.3 per cent and 9.6 per cent, respectively.

Indian sailors stuck in China to return next week