Contrary to the claims of scientific papers, however, farmers of Punjab claim that they have been burning paddy stubble for decades, ever since they were encouraged by the government to grow it to overcome India's food shortage
Prasanna Mohanty

While farmers of Punjab, Haryana and western Uttar Pradesh get annual drubbing over stubble burning (paddy residue called "parali" in local language) which pollutes Delhi's air during the winter months of October and November, very few know that they were forced into it.

There are many multi-institutional studies that say why and when stubble burning started in Punjab and neighbouring states.

Two credible studies - one led by NASA and published in July 2018 ("Crop Residue Burning in Northern India: Increasing Threat to Greater India") and another led by Harvard University and published in February 2019 ("Detection of delay in post-1 monsoon agricultural burning across 2 Punjab, India: potential drivers and consequences for air quality") - say it started in mid-1980s with the introduction of mechanised harvesting for wheat (April-May) and paddy (October-November).

Mechanised harvesting leaves taller and massive crop residue as against manual harvesting, which cuts crop close to the ground and leaves much less residue. A visit to Punjab and Haryana will show harvesters leaving out 1-2 ft tall stubbles, compared to less than 6 inches in manual harvesting.

Contrary to the claims of scientific papers, however, farmers of Punjab claim that they have been burning paddy stubble for decades, ever since they were encouraged by the government to grow it to overcome India's food shortage. Later, mechanisation was also encouraged. Paddy residue left by harvesters takes one-and-half months to decompose while farmers don't have sufficient time to sow their next crop, wheat. 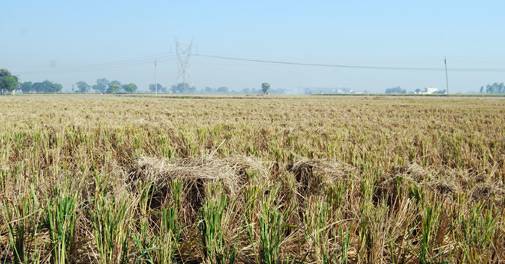 Stubble burning is a quick, cheap and efficient way to prepare soil bed for wheat, the next crop. There is yet another problem with paddy stubble which is why it needs to be burnt. Unlike other crop residues, paddy residue (except for basmati variety) are harder to chew, has low calorific value and high silica content, all of which makes it unsuitable for use as animal fodder.

Delhi's air pollution is not just because of stubble burning. There are multiple and far more critical factors, like Delhi's foggy winter conditions and low wind speed during October-November (when paddy stubble is burnt), high industrial and vehicular emissions and dust in and around it. (For more read "Rebooting Economy 39: Why nobody questions industries polluting Delhi air the most?")

Paddy was not an important crop in Punjab in the pre-Green Revolution era but became one later. From a mere 7.1% of cropped area at TE (triennial ending) 1973, paddy cultivation expanded to 36% of cropped area at TE 2013 in Punjab. Procurement of paddy at the minimum support price (MSP), which provides an assured income to farmers, also helped to popularise it. In turn, the high water-intensive paddy shrunk Punjab's water table rapidly.

The traditional method of flooding paddy fields with water works as a natural weedicide and hence, is a popular method of cultivating it and is more often sown in monsoon months across India.

Another major factor often ignored is that Punjab and Haryana both enacted laws to protect their rapidly shrinking groundwater level by forcing farmers to delay sowing and transplantation of paddy from May to June.

Haryana notified The Haryana Preservation of Sub-soil Water Act of 2009 in March 2009, prohibiting nursery sowing and transplanting paddy until May 15 and June 15, respectively. It put a penalty of Rs 10,000 per hectare a month or a part thereof and cost of destroying sown or transplanted paddy on farmers.

Punjab notified an identical law, The Punjab Preservation of Subsoil Water Act of 2009 in April 2009, prohibiting nursery sowing and transplanting paddy until May 10 and June 16, respectively. Violations attract the same penalties as in Haryana.

How has this impacted stubble burning?

The delayed sowing led to delayed harvesting and left very little time to ready soil bed for sowing wheat, forcing farmers to burn paddy residue in the field. The delayed stubble burning also meant that smoke from it got into Delhi at the worst possible weather conditions in late October to mid-November when air quality is very poor in any case. (For more read "Rebooting Economy 39: Why nobody questions industries polluting Delhi air the most?")

It found, in Punjab 86% paddy was planted on or before June 28 for six years (2003 to 2008) prior to the water conservation law, which fell to 40% in 2009 and thereafter. Accordingly, paddy harvesting shifted to a later period: from about 40% harvesting before October 26 during 2003-2008 to 14% in 2009 and thereafter. The impact in Haryana was less pronounced since the short-duration basmati (aromatic) grown here was sown later even earlier.

The study also found that following the water laws stubble burning declined in the last fortnight of October but "significantly increased" in the first three weeks of November - a time when Delhi's temperatures are lower by 3 degree Celsius and wind speed is weak, which discourages dispersal of air pollutants, compared to the second fortnight of October. Consequently, the average PM2.5 concentrations in November were found to be 29% higher in post-water conservation laws, it added.

The 2019 Harvard study cited earlier reached similar conclusions: "We find that the peak fire intensity of the post-monsoon burning season in Punjab has shifted later in time by over two weeks from 2003 to 2016, with a 40% increase in overall fire intensity."

It found "high fire intensity days preferentially occur during the latter half of the fire season, when the optimal window for sowing is shrinking". It concluded: "First, a shortened harvest-to-sowing period may further encourage farmers to burn crop residues in order to sow winter wheat on time. Second, the timing of peak crop residue burning may increasingly coincide with winter meteorology that favours severe smog events downwind across the IGP (Indo-Gangetic Plain), where we diagnose a 50% increase in AOD (a measure of surface PM2.5 concentrations) of exceedances..."

In the last two years, however, things have changed a bit.

The delayed sowing has been temporarily reversed a bit in the 2019 and 2020 Kharif season for reasons other than water conservation or air pollution.

In 2019, the Punjab government advanced paddy transplantation to June 13, from June 20 set earlier, because farmers complained of high moisture content in the crop due to late sowing (which delays harvesting and lowers paddy price in mandis). When this was challenged, the National Green Tribunal (NGT) upheld the change, although justifying it as a move that would reduce Delhi's air pollution.

In June 2020, Punjab again advanced paddy transplantation, first to June 13 (from June 20) and then to June 10 as farmers wanted more time due to labour shortage caused by the pandemic-induced reverse migration.

Consequently, paddy harvesting has been early in 2020 but not in 2019. A senior Punjab Pollution Control Board (PPCB) official said Punjab received rain in September 2019 which delayed harvesting.

The first solution to reducing stubble burning (and save Delhi's air) is, therefore, to go back to the earlier cropping pattern (that existed before 2009) but that is easier said than done because of progressively falling groundwater level in Punjab.

The second solution is to promote short-duration crops, like basmati (PB1509) as is popular in Haryana, which have a maturity period of 85-90 days, instead of 110-120 days for non-basmati ones. This too is easier said than done because basmati is not procured at MSP, thereby denying farmers an assured income and dis-incentivising its use.

Third is to win away farmers from growing paddy altogether to restore the earlier diversified cropping pattern. That too is not easy because procurement at MSP is confined to wheat and rice, not pulses, vegetables, fruits or other crops, even though MSP is announced for 23 crops every year.

Fourth is to adopt technology. Punjab farmers are increasingly using various techniques and equipment to avoid stubble burning: direct seeding of wheat without removing paddy stubble, including by using Happy Seeders and cutting and mixing paddy stubble with soil using Rotavators and Mulchers. In this case, there is always a shortage of equipment.

Punjab farmers are also not happy with such experimentation because they say these techniques don't work for paddy stubble because (i) it takes more than a month to decompose and mix with soil even then (ii) provides ideal breeding ground for rats and termites that damage their crops and (iii) adversely impacts wheat germination, leading to significantly lower yields.

Fifth is to encourage alternate use of paddy stubble: making paper and packing materials, generating energy (or using in cement plant) and making composts. Hay Baler machines that compress crop residue into bales can be spotted in Punjab and Haryana during this time of the year but are prohibitively costly for farmers.

Composting stubble is an idea that has not found farmers' favour, in spite of years of government efforts. The liquid decomposer solution, recently developed by the Indian Agriculture Research Institute (IARI) at Pusa and being promoted by the Delhi government, is the latest in the list of alternatives which is yet to travel beyond its borders.

There is more to stubble burning than Delhi's air pollution

It is often ignored that stubble burning's impact goes far beyond Delhi.

A 2018 study by NASA ("Crop Residue Burning in Northern India: Increasing Threat to Greater India") looked at satellite images and ground-based sources during 2003-2017 and concluded: "...an increasing impact of CRB (crop residue burning) over the eastern parts of the Indo-Gangetic Basin and also over parts of central and southern India. The increasing trends of finer black carbon particles and greenhouse gases have accelerated since the year 2010 onward..."

The health implications of stubble burning are for those living in eastern, central and southern India as well.

Further, stubble burning has serious implications for climate change (along with pollution caused by industries, vehicles and other such sources).

A NASA explanatory note on "biomass burning" says pollution caused by it has both long- and short-term effects on Earth's atmosphere and climate system. Such burning releases greenhouse gases, like carbon dioxide, nitrous oxide and methane, which cause global warming.

Stubble burning is not the only problem for Delhi's air pollution or limited to October-November period. It is a year-round phenomenon, outside stubble burning.

The air quality index (AQI) that the government's System of Air Quality and Weather Forecasting and Research (SAFAR-India) tracks daily takes into account concentrations of eight pollutants - PM2.5, PM10, carbon monoxide, nitrogen dioxide, sulphur dioxide, methane and lead. The combined concentrations of all eight pollutants go into preparing the daily AQI, which is then classified into six categories to define the quality of air, ranging from "good" (0-50) to "severe" (more than 400).

Here are the CPCB's findings.

The following graph maps all six categories of AQI days in Delhi in 2019 and 2018 from this report.