Xiaomi to launch Redmi TV in India on March 17, all we know so far

The smartphone maker has been selling televisions in the country under its Mi sub-brand for few years and is now set to expand the portfolio. 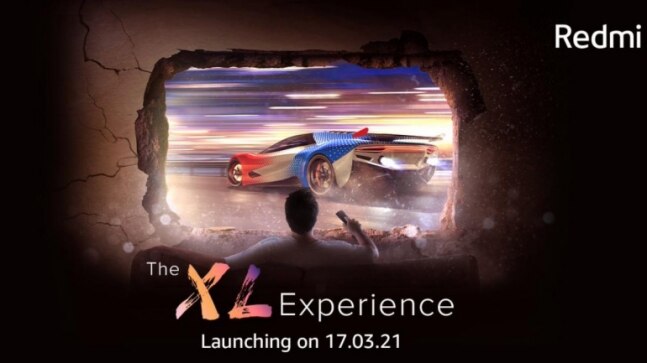 Xiaomi has announced that it will be introducing the Redmi TV line-up in India on March 17, 2021. The smartphone maker has been selling televisions in the country under its Mi sub-brand for few years and is now set to expand the portfolio. Since the Redmi sub-brand has always focused on the budget category and boasts of affordable products, the new televisions are expected to light on pocket.

The teaser shared by Redmi India on its social media handles teases a 'XL' sized smart TV from the company. This sort of confirms that the first Redmi TV will have a large screen size. The smart TV will be launched at 12 noon on the mentioned date. It will be an online-only event. Redmi TVs have been selling in Xiaomi's home market China.

The announcement comes day after a Xiaomi executive had told PTI that the Redmi TV will target the "much younger" audience as compared to the Mi brand. Xiaomi India Category Lead (Smart TV) Eshwar Nilakantan had confirmed that the new TVs will be made by Dixon. He did not reveal any details or specifications of the upcoming smart TVs.

"The market is massive and there is space for a new brand to come in. We believe the new audience who are going to come in is going to be slightly different from let's say the audience that we are catering to currently, which means that there is a need to have a different positioning and that is why we are entering with the Redmi brand," he had said.

To recall, Xiaomi had launched the Redmi Max 86-inch Ultra-HD LED TV in China last month alongside the Redmi K40 series. . Redmi Max Ultra-HD (4K) TV is priced at CNY 7,999 (Rs 91,000) and is available only in China as of now. Given this TVs high price, it is unlikely to be introduced in India right now but a possibility can't be ruled out.

Redmi Max 86-inch TV features an LED-backlit LCD screen with an Ultra HD (3,840x2,160 pixels) resolution. It's HDR support covers multiple formats including HLG, HDR10, HDR10+, and Dolby Vision. The television has a maximum refresh rate of 120Hz. The television is powered by a quad-core CPU and has 2GB of RAM and 32GB of internal storage.

The television comes with three HDMI ports, of which one support HDMI 2.1 with the higher refresh rate of 120Hz, along with auto low-latency mode.